COMERAGH Cycling Club member Damien Vereker has been named on the 2016 Paralympics Ireland Athlete Panel.
This is the final panel for selection for the Irish team for the Paralympics which take place later this year in Rio de Janeiro.
In total, 56 elite Irish athletes from 10 sports are represented on the panel.
At the Rio Paralympics, Irish athletes will compete against approximately 4,350 athletes from 176 countries over the course of 11 days.
However in order to ensure that Damien makes the final cut for Rio, fundraising efforts are taking place locally. 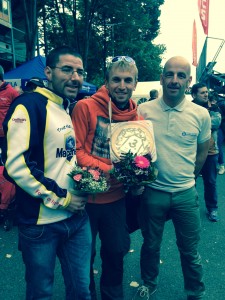 Damien, who is visually impaired, started as a leisure cyclist and through his involvement with Comeragh Cycling Club he has progressed to reach Paralympic standard.
Martin Kirwan of Focus on Fitness came on board three years ago and started racing with Damien, with Martin piloting the tandem bike.
The duo went on to enjoy considerable success.
“He was getting really good results but after reaching a certain stage he needed to get a different pilot,” explained Martin.
Damien teamed up with Martin Mizgajski and continued the successful streak.
However, Martin has remained involved in coaching with Damien.
Martin is keen to promote para-cycling and, along with Ronan Clinton, he established a local para-cycling club.
“The club is up and running now and we’re ready to expand,” explained Martin.
“Our priority at the moment is to work with Damien and ensure he gets to Rio, but the overall goal is to promote para-cycling.”
It’s hoped that the profile of para-cyclists in Ireland, and their great efforts, can be heightened.
“They probably don’t get as much recognition as they deserve,” said Martin.
“A lot of people don’t understand what goes on behind the scenes.”
Participation in para-cycling has given Damien a new lease of life, as Martin explained.
“It’s a huge thing to compete at this level,” he said.
“Damien has gone from being a leisure cyclist three years ago to the stage he’s at now.”
Damien will have to participate in three to four races in April-May which will decide the final squad for Rio.
However, as the races all take place abroad, substantial costs are involved.
“There is a massive expense involved, even in the cost of transporting the bike alone,” said Martin.
It’s also hoped that Damien’s bike can be upgraded.
“We’re not in a position to replace the bicycle, but we’d like to upgrade it,” he explained.
A fundraising night will take place on Friday March 25th in Kilcohan Park Greyhound Stadium to help ensure Damien experiences his Rio dream.
Carl Pallas, Commercial and Operations Manager at Kilcohan Park Greyound Stadium, is hoping that the upcoming event will be well supported.
“Fundraising nights are a key component for the Irish Greyhound Board and have proven to be very successful,” he said. 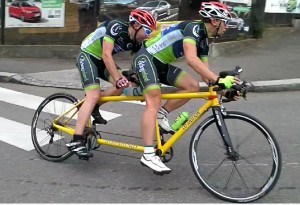 Damien and Marcin on the bike.

Last year, 30 local clubs and organisations (including GAA teams, local charities, community groups etc.) raised money through holding such an event at Kilcohan.
Such fundraisers can be held as a ticket only event; a medium-mini buster draw; or a buster draw (for more information see www.kilcohanparkgreyhoundstadium.ie or call 1890 269 969).
Each club and organisation can look at other revenue streams as well such as race sponsorship, dog nominators, restaurant dinners, race card advertising, raffles etc.
“Each group can also come up with their own ideas,” said Carl.
For Damien’s fundraiser, organisers came up with the novel idea of holding three novelty human races at the greyhound track.
“The human races will be mixed in amongst the greyhound races,” explained Carl.
There will be three human races on the night featuring local hurlers, cyclists and athletes.
The top two from each race will go into a final on the night.
So, lend your support to a great night for a great cause!
For more information check out the Focus on Fitness Facebook page or contact Carl Pallas at Kilcohan Park Greyhound Stadium (carl.pallas@igb.ie or 061 448061