BALLYDUFF’S Dawn Players are busily preparing for their latest production which opens tomorrow (Wednesday) night.
Now in their 21st year, the Dawn Players are aiming to once again provide top class entertainment for their audiences.
This vibrant and talented group was founded in 1995 by Fr Michael O’Byrne who started the group because of his great love of drama.
He was involved in drama groups in his previous parishes and has both acted and directed. 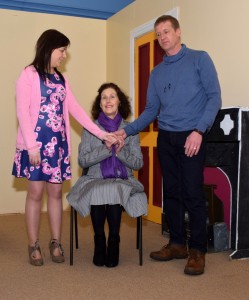 The Dawn Players’ first play was Lovers (see our Down the Decades page for a lovely group photo from their 1996 production of The Honey Spike).
While different members have been involved over the years, a high standard of entertainment has always been maintained and the Dawn Players have treated audiences to some fabulous productions.
Previous productions have included: The Honey Spike, I’ll Get My Man, Many Young Men of Twenty, Dancing at Lughnasa, The Shoughraun, Short & Curlies, My Wife’s Family, Big Maggie, The Hostage, Bottles With Baskets, None The Wiser, Woomerang, A Galway Girl, Lovers, Canaries, Cash on Delivery, The Gods Are Angry Miss Kerr, The Cripple of Inismann, and The Year of the Hiker.
This year’s production of ‘Separate Beds’ runs from Wednesday 9th March to Saturday 12th March in Ballyduff National School at 8pm.
Producer Declan Finn explained that rehearsals began last October.
“Up to Christmas, we were rehearsing twice a week and since then we have been rehearsing three nights a week,” he said.
“The last two weeks have been particularly busy, organising props, lighting etc. It’s a big demand on everyone but it’s very rewarding.”
He explained the decision to choose ‘Separate Beds’ which was written by Sam Cree from Belfast.
“It’s relatively unknown but this play suits the cast we have, the number of males and females and the age groups. We’ve had to adapt the play as there were a lot of Northern Ireland colloquialisms which we have replaced by basing the play in Waterford so we refer to local places instead.”
Director Denise Quinn said the community aspect associated with the Dawn Players is very special.
“This is a great bunch of people to work with. They have a great following and their audience always supports them. For me, it’s an absolute pleasure to work with them,” she said.
“It’s really community driven – the people who sell the tickets, operate the phone line, come and sell the raffle tickets, make and serve tea, and the men in here during the day hammering and painting. The whole community is behind them.”
Denise says the comedic value of ‘Separate Beds’ will appeal to all.
“It’s absolute comedy. The title reveals a lot – you know the territory that we are in! But it’s good light hearted comedy. There’s nothing you couldn’t bring your 10 year old or your Granny to see.”
Eileen O’Leary, a stalwart of the Dawn Players, has been involved with the past 14 productions.
This year, she plays the role of Sarah who is the mother of the groom.
“I love drama and it’s important to keep drama alive in the parish,” she said.
Pat Power plays Reverend Matthew and has been associated with the Dawn Players for around five years.
“I’m retired so it’s a great pastime,” he said.
Along with the cast, there is also a strong background crew who all volunteer to help with the set, costumes, hair, make-up etc.
Previously, the Dawn Players have taken a number of their productions outside of the parish.
“We went to Kilkenny three years ago and we went to Dungarvan two years ago to raise money for the Irish Pilgrimage Trust,” explained Declan Finn.
This year, it was decided that profits would go to the local Community Centre.
The centre is an important focal point within the community and has further contributed to enhancing the great community spirit which exists in the area.
Since opening, the refurbished centre has played host to many different events including Nollaig na mBan, Slim Spiration, the ‘Stars in Their Eyes’ talent show, kids’ discos, and Foróige meetings. 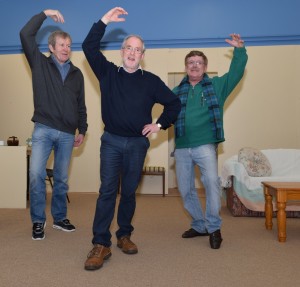 Declan, who is Chairman of the Board of Directors of Ballyduff Community Centre Company Ltd., explained that they still have to replace the roof on the old section of the centre.
This, along with other works, will require significant funding.
“We made a special effort to help promote the play this year, so we hope to have good audience numbers,” he said.
Miriam Daly, who plays the very humorous role of single farming girl Madge, says audience members can be assured of plenty of laughs.
“There has been a lot of hard work but it’s great to see it all coming together now,” she said.
Separate Beds consists of a very humorous plot with equally humorous sub plots running throughout.
Don’t miss this opportunity to enjoy a few laughs while also supporting a great community initiative.
Tickets are €12 and are available to purchase by calling or texting Linda on 087-4487648.