LAST week the small community of Faha outside Kilmacthomas mourned the death of one of its oldest and longest residents.Each community has its own individual people who define that particular area and, in the case of Faha, Mary Flynn was certainly one of its stars. Having grown up in the area, I am fortunate to have personal experience of the positive impact which Mary had on the lives of those within her community and beyond.She was the ‘go to’ person in our community. 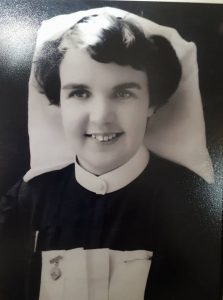 Mary Flynn from Faha, Kilmacthomas was a well-known orthopaedic nurse at Ardkeen Hospital and also worked in england during WW2

Mary epitomised the traditional Irish neighbour and the Flynn household has always been the quintessential ‘rambling house’ with a conveyor belt of visitors.I often remarked that it was like Sky News HQ as, after leaving, you would most definitely be up to speed with all of the local happenings!
In fact, you could say Mary provided me with one of my first steps into the world of ‘journalism’.
In 2002, as a first year student at St Declan’s Community College, Kilmacthomas, my English teacher Laura Nolan set our class the task of recording an interview with an elderly person or persons within our community.
I knew there were two people who I simply had to interview – my neighbour Mary Flynn and her sister Philomena Dobbyn.
Both had worked as nurses in England during and after World War II and loved storytelling and reminiscing.
They were only too delighted at my request for an interview so I enthusiastically headed up to Mary’s farmhouse one evening armed with my radio and cassette to record the interview.
Mary then drove us down to Philomena’s house which was located nearby.
I decided to specifically focus on their time nursing in England as, throughout my childhood, I had heard many snippets of what sounded like fascinating stories.
During our interview, the sisters spoke of their nursing memories and all of the people they met while in England.
An entrance fee was required to train in Irish hospitals during the 1940s so Mary and Philomena found it difficult to get work experience at home.
Undeterred, they decided to travel to England to seek work, heading for Stoke-on-Trent where their aunt worked as a radiographer and a ward sister in City General Hospital.
Mary had embarked on the daunting journey firstly, followed shortly afterwards by Philomena.
Their experience was reminiscent of the journeys undertaken by countless other Irish people.
With little money and no modern telecommunications, they travelled to Dún Laoghaire to catch a ferry to Holyhead, a train to Crew, and another train onto Stoke-on-Trent.
Travelling outside Waterford for the first time, Mary and Philomena faced many challenges but recounted their time in England with fond memories.Mary spoke of nursing the late English soccer international Sir Stanley Matthews, widely regarded as one of the greatest ever players of the game in Britain.
She also spoke of the panic of hearing the air raid siren during one of her first nights in England – a stark difference from the quiet surroundings of County Waterford to which she was accustomed.
For the full text of this story see this week’s print edition of the Munster Express