The beautiful chicks created by the ladies of Headgear for Hospice.

Headgear for Hospice was originally started by Lily Moody, Mary Dunphy, Anne Nolan and Nellie Moore.
Initially, the ladies used their talents of knitting and crocheting to make and sell headgear such as hats, scarves and headbands.
Their time and talents are contributed on a completely voluntary basis and all proceeds raised are donated to Waterford Hospice.
Now, due to the phenomenal success of their products, they have branched out into creating Christmas decorations, wedding favours, and novelty items for Easter including beautiful chicks and rabbits in a variety of eye catching colours.
And, the number of enthusiastic volunteers has expanded from four to between 20 and 30.
In total, the ladies associated with Headgear for Hospice have raised over €50,000 since they began their fundraising efforts.
They have received much support from local supermarkets such as Ardkeen Quality Foodstores and SuperValu and are very grateful for the support which they have also received from the public.
The beautiful Headgear for Hospice Easter creations will be available to purchase in a number of locations including Ardkeen Quality Foodstores.
They also attend events such as the Waterford Harvest Festival.
Generally, the ladies carry out their knitting and crocheting individually but meet up with each other every so often.
Their group includes many people who haven’t been knitting for years but have taken it up as a means of helping Waterford Hospice.
The Waterford Hospice committee held a meeting at Beckett’s on the Dunmore Road last Tuesday morning (with the support of new owner Clifden Foyle) where plans were discussed for the year ahead.
At this meeting, the Headgear for Hospice group handed over a cheque for €17,000 – the total proceeds from this winter.
Waterford Hospice Fundraising Chairperson Marie Cummins praised the work of the ladies associated with Headgear for Hospice.
“Who would have thought that a ball of wool could end up raising €51,000?” she said.
Volunteerism is at the heart of the efforts of Waterford Hospice, and Marie emphasised the fact that all of those present were volunteers.
She also spoke of the important work of Waterford Hospice’s homecare team.
Waterford Hospice provides a wonderful homecare service, with homecare nurses on call 24/7.
“We shouldn’t even have to be running this. The government and the HSE should be providing this service,” she said.
Huge fundraising efforts are underway in order to deliver the proposed palliative care unit for Waterford.
Waterford Hospice and HSE South recently signed a Memorandum of Understanding for the New Regional Palliative Care Unit at University Hospital Waterford (UHW).
Waterford Hospice Movement is supporting the capital cost of the building and to date has collected almost €4 million, thanks to the generosity of the people of the south east.
With a fundraising target of €6 million and a commitment from both the Waterford Hospice Movement and the HSE South to co-fund the building, the board is confident that it will raise the remaining €2 million over the next two years through a number of fundraising activities.
The new state of the art 20-bed Regional Specialist Inpatient Unit & Day Service in Palliative Medicine, will deliver specialist palliative care, inpatient day services and community services to patients and their families within Waterford and the south east. Construction is scheduled to start this year, with completion expected in the latter quarter of 2018. 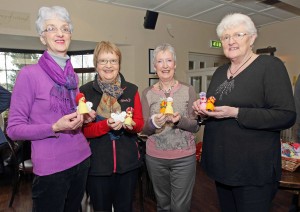 Waterford Hospice has many fundraising events planned for the coming months including: a cabaret night in April; the annual Sunflower Day in June; the annual Midsummer Night in The Woodlands Hotel on June 17th; the hugely popular Ball Race down Patrick Street during the first weekend in August; a summer field day in Dunmore East; coffee mornings in September; and the poignant Walk to Remember in November.
“We’re trying to hold some fun fundraisers and organise something which gives people an opportunity to get something in return for the money which they are donating,” explained Marie.
“We also have individual events which people offer to organise for us,” she said.
She praised everyone who helps out with Waterford Hospice’s fundraising activities, including many local businesses which are loyal supporters.
For further information on Headgear for Hospice contact 086-0480696 or email headgearforhospice@gmail.com. For further information on Waterford Hospice visit www.waterfordhospice.ie or call 051 844 847. 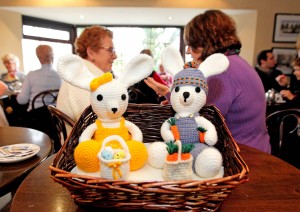 An Easter creation by the Headgear for Hospice group.