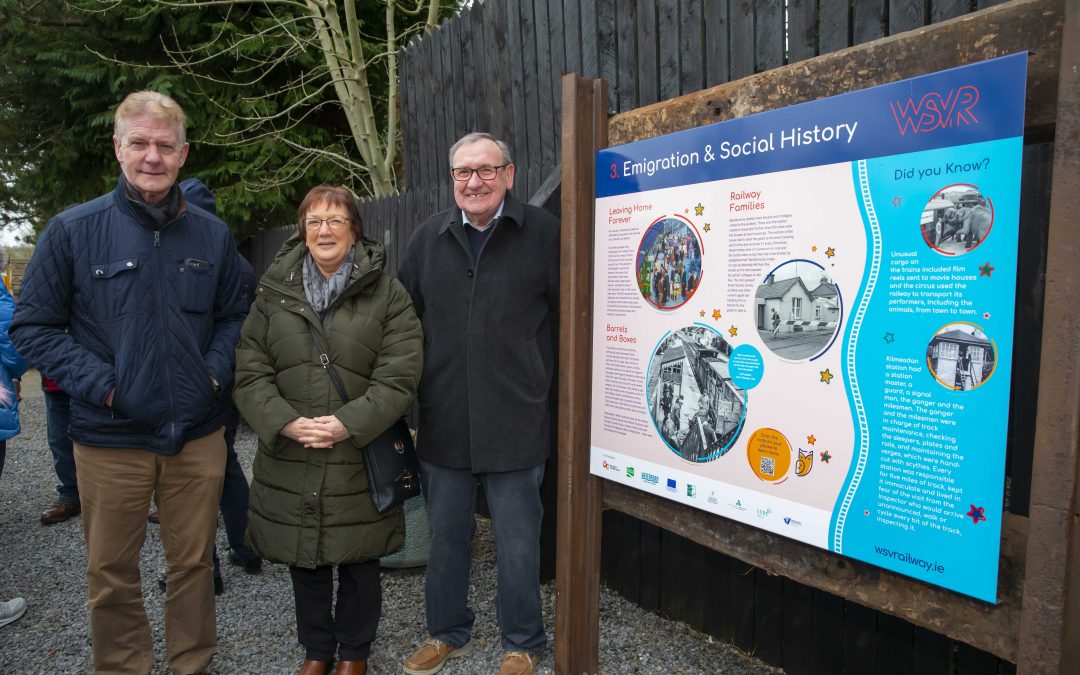 One of the major success stories of tourism in County Waterford is the Waterford Suir Valley Railway (WSVR) in Kilmeaden.

WSVR is a voluntary, community heritage project with charitable status and has been in operation for more than 20 years. The attraction has featured prominently in both national and international media since opening. Among the many famous faces to have stopped off at WSVR is Michael Portillo who visited in 2012 during filming for his BBC series ‘Great British Railway Journeys Goes to Ireland’.

Offering panoramic views throughout, the route meanders alongside the majestic River Suir. Noteworthy features en route include Kilmeaden Castle, Mount Congreve Gardens, and the ‘Magic Wood’.   The journey reaches scenic Carriganore, which affords further stunning views of the river and the Waterford and South Kilkenny countryside. Select journeys travel further through the Dan Donovan Tunnel and onto Gracedieu Junction.

After returning to Kilmeaden Station, passengers can indulge in light refreshments from the Whistlestop Café.  Numerous special events are staged at WSVR throughout the year, including the Sunset Express which runs on Thursday evenings from June to August, Halloween events during the October Midterm break, and the Santa Express at Christmas.

‘The Story of Rail’

At a special event on Thursday February 17th, ‘The Story of Rail’ was unveiled at WSVR. The launch coincided with the reopening of the railway for the 2022 season.

The official unveiling of story boards represented the final stage of WSVR’s rebranding project which began in 2019. Manager of WSVR Maria Kyte explained the background to embarking on this project.

“We discovered that while we are doing a good job at operating the railway, welcoming guests, and running events, we weren’t so good at telling our story or telling the story of rail. We figured this had to change,” she said.

She thanked all involved in bringing ‘The Story of Rail’ to a wider audience.

“It wasn’t an easy task to condense the history of rail, and 22 years of WSVR history, into a few paragraphs,” she said. “We are very happy to see the final aspect of the rebranding of the WSVR project finished.  It has been a pleasure working with rebranding experts Totem. Colin Byrne and his team have delivered us a brand that reflects what the Waterford Suir Valley Railway is about, and we will be proud to use it as we continue to develop the story of rail in the future.”

Maria said the research carried out into the railway stories proved to be an interesting project for all involved.

“We spoke with families such as the Dunnes, the Colemans and the Donnellys, whose ancestors were involved in budling this railway line back in 1870,” she explained. “For generations, their sons and sometimes daughters followed in their parents’ footsteps to work on the railway. Their descendants, Des O’Keffee and Jim Coleman, who volunteer here at WSVR, and Michael Dunne, recently retired form Irish Rail, were a mine of information.”

She continued: “It was important to us to use railway material, so we chose old rail and sleepers from the station to hold the storyboards. It’s a wonderful, bright addition to Kilmeadan Station. The WSVR maintenance crew prepared the supports, and the boards were printed and erected by Signiatec, Kilkenny.” 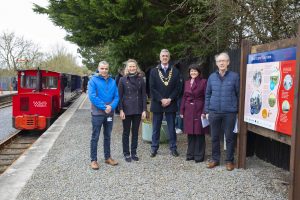 The five storyboards feature stories WSVR wanted to preserve and share: the story of rail, of time, of emigration, sport and social history, of how the railways were built, what they were used for, how they were a mirror to Irish society, and the story of WSVR itself.

Funding of €23,082.50 was awarded to the Rebranding of WSVR project under the National Rural Development Programme 2014 – 2020, implemented by Waterford Leader Partnership CLG on behalf of Waterford Local Community Development Committee (WLCDC) and Waterford City & County Council.

Photographs for the story boards were donated by Ciarán Cooney, the Irish Railways Records Society archivist, and Waterford County Museum. There’s an abundance of fascinating and surprising stories, from William Dargan, the father of Irish Rail, to Isambard Kingdom Brunel, the great engineer.

The arrival of the railways changed society in many ways, opening up a whole new world to ordinary people. All kinds of goods became available via the railways, and these new additions to our landscape even changed how we tell the time.

The platforms of every station throughout the country saw tragedy and joy in equal measure. Travel and tourism exploded, with branch lines all over the country carrying emigrants away from their homes, goods and livestock for export and to stock shops with new factory goods.

“In 1920, there were 964 train stations on the island of Ireland. By 2020, only 142 stations remained,” explained John Norris, Chairman of WSVR. He paid tribute to Manager Maria Kyte for her “unique and unstinting contribution” and for being the “guiding light” for WSVR throughout the past two decades.  “All of us here today can witness the fruits of those endeavors,” he said.

He also praised past and present volunteers. The voluntary board of directors at WSVR oversee the governance of the project. There are eight participants on Tús, Rural Social Scheme and the Community Employment Scheme; three full time and one part time staff; and five seasonal staff who join the crew on a part time basis during the summer season. All the train drivers work on a voluntary basis with a minimum of three on duty each day. The operation is self-funding and does not receive any regular funding support from national or local governments other than once off grants for specific projects every so often.

“We are custodians of WSVR for future generations,” adds John. “I’m absolutely convinced that WSVR is the perfect model for all social enterprises in Ireland, and long may the good work continue.” 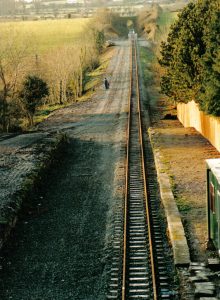 Clare Connors explained how WLP has been supportive of WSVR since its inception, including projects such as the train shed and workshop in the early 2000s, as well as assistance with landscape and signage.

Clare said it was wonderful to see WSVR embark on a new rebranding initiative, and commended Maria and the team for all their work. She explained that under the Rural Development Programme, the project was funded through a specific measure designed to add further value to existing tourist offerings.

“This project certainly adds a huge amount to the tourism offering in County Waterford,” said Clare. “Maria and her team are constantly looking to enhance the visitor experience and they’ve certainly done that.”

She also paid tribute to all of the volunteers, saying: “These types of projects depend hugely on the time and effort of volunteers and all the work that’s done tirelessly behind the scenes.”

Clare praised the board of WSVR who “never rest on their laurels” and she wished the project continued success into the future. 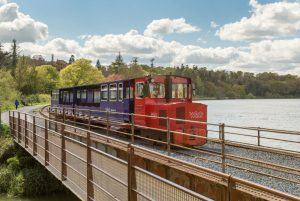 WSVR train by the banks of the River Suir.

“We have collaborated with WSVR since the development of Greenway pre-2017 and we’re delighted to continue with that collaboration, helping each other out whenever we can,” he said. “The Waterford Greenway, like WSVR, is synonymous with quality and being a great visitor experience.”

He referenced the Greenway’s recent win in the Irish Independent Reader Travel Awards when it was named ‘Ireland’s Best Visitor Attraction’.

“I mention that not to blow our own trumpet, but because it is through engagement and communities working together, as has been done here at WSVR, that the Greenway has reached that level.”

He thanked the board of WSVR, all of the volunteers, and everyone involved down through the years. He said a huge amount of work had gone into developing ‘The Story of Rail’, highlighting the funding applications, research, and compilation work involved.

He pledged that Waterford Council would continue its ambitious plans, and said the local authority is already busy working on projects, both large and small, relating to the future development of the Greenway.

A number of projects are planned, including the resurfacing of the Greenway link into Kilmeaden village. The Council is also working with local authorities in Wexford, Kilkenny, Tipperary, Cork towards “building a Greenway product”.

The Waterford Greenway has undoubtedly been on the most successful projects ever undertaken in Waterford, and it’s clear that WSVR plays a key role in this success. So, if you’re looking for a pleasant day out then make your way to Waterford Suir Valley Railway and step back in time while admiring the gorgeous scenery on our own doorstep.

For information on timetable and fares visit www.wsvrailway.ie or call 051-384058