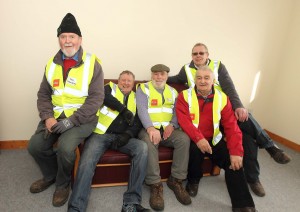 The Dungarvan Men’s Shed has set the bar for what can be achieved and has won numerous accolades since its establishment over five years ago.
Meanwhile, the Déise Men’s Shed, located at the Six Cross Roads Business Park, has been going from strength to strength since opening last year.
The Men’s Shed movement recognises that each man is a teacher and a learner, each having different levels of skills (professional and practical) to share collectively.
The Men’s Shed offers a place where men can come together and help out in their communities; have a chat and a cuppa; and improve their own wellbeing by keeping physically, mentally and socially active.
Members of Men’s Sheds consist of men who are unemployed, retired or employed and have spare time on their hands.
The Shed is not a service organisation and the ethos is very much on self-help and learning from each other, with each Shed seeking to enable members to become self-reliant, creative and self-motivated. Activities which are undertaken include conversing with other men, participating in community regeneration projects and learning skills that will overcome their dependency on others.Members are provided with information and training in the areas of Social Enterprise, Leadership Skills, Group Facilitation, Community Development, Health and Safety, and Policy Development.
Preparations for establishing the Waterford Estuary Men’s Shed began last July when a need was identified for a Men’s Shed in this corner of East County Waterford.
However, the committee behind Waterford Estuary Men’s Shed didn’t want to limit the Shed to one particular village. Although based in Passage East, Waterford Estuary Men’s Shed covers a large catchment area from Knockboy on the outskirts of Waterford City to Dunmore East, incorporating areas such as Faithlegg and Cheekpoint along with Ballyhack in County Wexford. The committee is comprised of Chairperson John Lyons, Secretary Noel Shanaghy, Deputy Chairman Gerry Murphy, Treasurer Jim St Ledger, Deputy Treasurer James O’Sullivan and Facilities Officer Gerry Murphy. 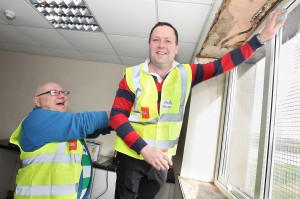 Undoubtedly, it’s the enviable location of this Men’s Shed which sets it apart from all others.However, this did not come about easily as the committee had spent around four months looking for a premises and encountered many difficulties. “We were nearly at a stage of asking if we could actually pull this off at all,” Noel Shanaghy admitted.
“In a town, there may be more empty buildings but in a rural area there aren’t so many. We called ourselves a Men’s Shed but we didn’t have a building so officially we didn’t exist as we couldn’t join the Irish Men’s Association until we had a premises.”