Almost 90 per cent of the earthworks operations for the €230 million New Ross Bypass have now been completed, with a million cubic metres of bulk earthworks having been excavated and re-used to date.
The latest update on the project was provided to South Kilkenny’s County Councillors at the December meeting of the Piltown Municipal District, which was held at the Ferrybank Centre on Wednesday last.
Rock blasting will be completed at Strokestown and Camlin “in the coming weeks” while drainage, services works and other associated works “are also progressing well”. 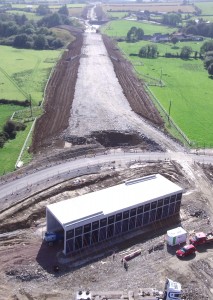 The €230m project is one of the largest construction projects ever undertaken in the South East.

The construction of the bridge deck on the approach spans of the Barrow Bridge, which will measure 887 metres upon completion (the world’s longest ‘extradosed’ bridge) on the Pink Rock/Kilkenny side is ongoing, with the falsework currently being erected for the third span, with concrete pours progressing for the first and second spans.
With construction of the pier head for the river pier also progressing, in addition to the piers on the Wexford side, the coming months shall see progress on the approach spans ob both sides of the Barrow. “The three central towers will be progressed in preparation for the construction of the two main bridge spans,” the brief dispersed to Councillors states.
Temporary diversions, in addition to statutory 60kph speed limits continue to operate on the N25, at both Glenmore on the Waterford road, and the Wexford road at Ballymacar. “The diversions are via newly constructed sections of road and will remain in place until 2018. Extensive traffic management is being implemented to guide road users safely through and around the diversion routes…The Pink Rock Road in Co Kilkenny remains closed to facilitate Barrow Bridge access and construction. A temporary diversion route and traffic management plan will remain in place until June 2018.”
The joint venture, which is being delivered by BAM Civil Ltd and Dragados Ireland Ltd, remains on course to open in 2019.
A dedicated website, www.n25newross.ie, continues to provide progress updates, in addition to information on traffic management and road works, while a 24-hour telephone line, 1800-815-672, will deal with queries and complaints from the public.