Home » Opinion » Foley on File » Ready for take off

Ready for take off 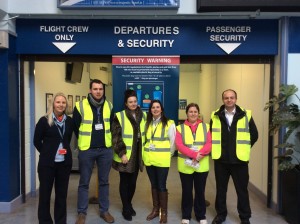 A fear of flying, or ‘aviophobia’, can be a debilitating condition for many people which can cause much distress.
While I thankfully don’t suffer from a fear of flying myself (and have managed to clock up quite a few air miles!) I decided to put myself in the shoes of a nervous passenger for a day.
The European Aviation College, based at Waterford Airport, Killowen, offers a one day course for those who suffer from a fear of flying.
On the invitation of Head Trainer Gillian Chiavacci, I arrived at Waterford Airport on Saturday last unsure of what to expect.
I met with my three ‘classmates’ for the day – Tracey from Stradbally, Pamela from Kilmacthomas and Chloe from Wexford.
Each had their own particular reasons for being in attendance – bad experiences of turbulence, claustrophobia etc.
“We can change anything we want. Fear is in the mind,” Gillian explained to us.
In a relaxed and friendly atmosphere, we began by discussing our individual experiences of flying.
Gillian, who worked as a pilot with a British airline, outlined her own experiences as did fellow instructor Max who is a pilot with an Irish airline.
After reassuring our group that there was no such thing as a ‘stupid question’, Gillian and Max were bombarded with questions from our eager group.
What if the landing gear fails? What if somebody attempts to enter the cockpit? What if communication with air traffic control fails? What if a pilot suffers a heart attack? What happens when there is loss of cabin pressure?
Gillian explained that airlines, particularly those which operate within Europe and North America, do so to the highest standards.
As she outlined, no airline wants to be associated with a major incident and will therefore invest heavily in safety precautions.
In fact, your chances of being in an aircraft accident are approximately one in eleven million with the most dangerous part of your flight being the drive to the airport.
Max explained that there were a number of main reasons for developing a fear of flying including a lack of understanding as to how aeroplanes fly.
“To me, it’s more disturbing to be looking down from a balcony than looking down from 40,000 feet,” he said.
Gillian and Max provided very useful tips such as the best foods to eat before boarding a plane in order to reduce anxiety and improve your reaction to turbulence.
We were also given a look behind the scenes at the operations of Waterford Airport.
Claire and the friendly staff at Waterford Airport brought our class through check-in and security procedures in order to demonstrate the entire process.
We were also given access to the control tower where we marvelled at the intricate operations.
One of the highlights of the day was the chance to explore the ‘flight simulator’ which is designed to replicate the inside of an airplane.
My three course colleagues, who had entered Waterford Airport nervously that morning, left laughing and speaking excitedly about their future trips abroad – surely a ringing endorsement!
Flying is a thrilling experience and, as Leonardo da Vinci said: ‘once you have tasted flight, you will forever walk the earth with your eyes turned skyward, for there you have been, and there you will always long to return’.
As Gillian said, there are so many wonderful destinations waiting to be explored worldwide so don’t allow a fear of flying to get in your way.
Gillian explained that there is huge demand for the course
“One in four people have some type of fear of flying. Initially we planned to do one course a month but now we’re looking at a few courses each month,” she said.
The European Aviation College offers courses weekdays and at the weekend and can also arrange private one-to-one tuition.
Instructors can also travel to bring the course on tour.
They have already received great feedback, including from a course graduate who recently overcame her fear and flew to Prague.
Gillian hopes that all those who have participated in the course can form a support network to share experiences and help each other.
She praised the great facilities at Waterford Airport and the team who have supported the European Aviation College’s Fear of Flying courses.
Partaking in the course certainly highlighted the fantastic amenity that Waterford Airport is.
It is a convenient, hassle free airport and a hugely important local facility for business, tourism etc.
Let’s hope that alternative routes can be sourced and that the airport can continue to grow.
For further information on the Fear of Flying course visit www.europeanaviationcollege.com, email info@europeanaviationcollege.com or call 051-843436.