Home » Opinion » Foley on File » "We Must Keep Speaking Out"

"We Must Keep Speaking Out"

Campaigner and cardiac patient will maintain the fight for UHW
A LOCAL health campaigner has reiterated her call for 24/7 cardiac cover for Waterford and the South-East following her personal ordeal at University Hospital Waterford (UHW).
After arriving at UHW with chest pains, Liz Murphy (whose story was originally detailed in The Munster Express last week), endured a wait of more than 30 hours in the Emergency Department and waited a week to receive an angiogram.
Liz eventually received her angiogram on Thursday last, having first arrived at UHW on the previous Wednesday.
She had been scheduled for the procedure on Friday but a slot became available on Thursday.
Liz, who had two stents fitted and was able to return home on Friday morning where she is now recovering, says she is glad she remained in hospital after being told she would require an angiogram rather than returning home.
She was advised that if she left UHW she would also lose her place – meaning it could take up to 10 weeks to get an appointment to see a cardiologist and receive an angiogram.
“Friends in the UK and US could not believe how long I was waiting for an angiogram,” said Liz.
“I’m a laugher, I’m a joker, but I was certainly worried during my wait. I’m sure the added worry wasn’t doing my heart any good.” 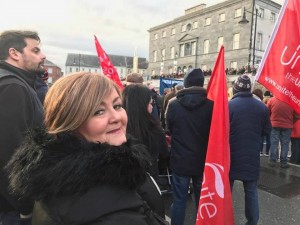 Liz Murphy pictured at the march in support of 24/7 cardiac cover at UHW held in Waterford last January.

In response to a query from The Munster Express last week, a spokesperson for UHW confirmed that, in relation to patients currently in UHW, no inpatient diagnostic angiograms are carried out in the mobile cath lab as this was specifically hired to facilitate outpatient waiting list in chronological order.
“Emergency cardiac care is not carried out in the mobile cath lab, but it is carried out in the main cath lab,” the spokesperson said.
However, controversially, this main cath lab only operates for limited hours Monday-Friday as has been well documented.
Liz, who has marched in support of 24/7 cardiac care for UHW, says it’s only when the issue is personally experienced that people can fully understand its seriousness.
“I marched to show support but I didn’t think this issue would ever come to my own door,” she said.
“I never thought it would happen to me. You don’t realise how serious it is until you experience it yourself.”
Liz says she is now worried that she may have to endure a journey to Cork should she require certain cardiac services outside of the operating hours of the UHW cath lab.
“We need 24/7 cover, nothing less. Not just Monday to Friday cover and not a mobile cath lab,” she said.
Liz, who is no stranger to campaigning thanks to her ongoing calls for greater services for diabetics at UHW, has already set about writing to politicians to further highlight the need for 24/7 cardiac cover at UHW.
She spoke with the UHW Patient Services Manager last week to outline her concerns in relation to both the lengthy waiting times being endured by patients in the Emergency Department and the lack of 24/7 cardiac care.
She praised the staff which she encountered at UHW and the care she received, adding that some staff members told her they were glad she had spoken out.
“They said nothing will change unless more patients speak out and that more people need to speak out,” said Liz.