WATERFORD’S youngest Councillor has said he was “embarrassed” to be a member of Waterford City & County Council following a recent incident which occurred in front of Comhairle na nÓg members.
Cllr Adam Wyse (FF), who is a steering committee member of Waterford Comhairle, criticised the antics which played out in front of two Comhairle members who were in attendance at the November plenary meeting of Waterford City & County Council in Dungarvan to give a presentation.
Cllr Wyse, who said the Comhairle consists of “very bright young individuals that genuinely have good ideas”, had spent time at their AGM a few weeks previously where around 50 young people had discussed various different issues.
“We’re supposed to bring those points into the Council and then members are invited in to hear us speak,” he explained.
Prior to the commencement of the November plenary meeting, Cllr Wyse had suggested that the Comhairle representatives give their presentation at the start.
However, they expressed an interest in watching proceedings in order to learn about how Waterford City & County Council operates.
“It’s rare to find two 16-year-olds who are that passionate and want to spend a school night in the Council chamber listening to us,” he said.
Cllr Wyse said he was disappointed that the Comhairle members witnessed scenes where Councillors were “shouting back and forth”. 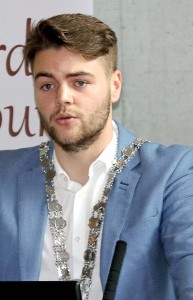 A spat had erupted while Cllr Davy Daniels (Ind) was attempting to highlight a number of issues of concern, including traffic management in Waterford City, which resulted in Cllr Damien Geoghegan (FG) interjecting “that’s a Metropolitan matter”.
Cllr Daniels then attempted to discuss the development of the Ard Rí site, which resulted in Cllr Geoghegan shouting across the Chamber “that’s definitely a Metropolitan matter”.
“A hotel in the city has nothing to do with the plenary body,” he said.
Bellowing, Cllr Geoghegan told Cllr Daniels that if Metropolitan based Councillors had “ran the city as well as we ran the county we wouldn’t have half the problems we have”.
Following a number of exchanges, Mayor of Waterford City & County Cllr Pat Nugent (FG) intervened and called for order.
Meanwhile, in another sharp exchange at the same meeting, Cllr Eddie Mulligan (FF) criticised Cllr Declan Clune (SF) for attempting to impose a “health and wellbeing tax on the Greenway”.
He was responding to a comment made by Cllr Clune in relation to Fianna Fáil supporting an increase in the Local Property Tax (LPT).
Cllr Wyse, who berated his fellow Councillors for their behaviour, said they were “not setting a good example” through their conduct.
He said such behaviour conforms to the stereotype that politicians constantly fight with each other and said he was embarrassed that Councillors would behave in such a way “rather than talking about the real issues and getting stuff done”.
During his tenure as Mayor, Cllr Wyse stopped meetings on a number of occasions as Councillors were “going back and forth and making petty, historical arguments”.
“We have 32 elected members for the benefit of Waterford but we often spend more time fighting with each other and having little digs at each other about Michal Collins, Sinn Féin or ‘Fianna Fáil wrecked the country’,” he said.
Cllr Wyse, who said he may be guilty of such behaviour himself, said he likes to think that he gets on well with other Councillors.
“Maybe some Councillors will say they don’t like me, but I feel I get on with most of the Councillors,” he said.
“We should be like a team instead of going back and forth like this.”
In another interview with The Munster Express in June following his tenure as Mayor, Cllr Wyse said he “hated politics”.
“I hate the actual corruptness and how slow it is. And the bureaucracy and hypocrisy kills me. I don’t enjoy politics, which sounds weird,” he said.
“I don’t mean I hate the job, but I think being a politician and being a public representative are a completely different thing. When people say to me that I’m a ‘politician’, I say ‘I’m not, I’m a public representative’.”
He continued: “I think politicians have a bad name, and in a lot of cases that’s their own fault. There are a lot of good politicians out there – but no perfect ones. I’ve seen some of the things that go on and it’s upsetting.”
He recalled his first experiences on the Council at 19 when he was “lead down the garden path”.
“When I came in at 19, I knew nothing about the Council, little about politics and nothing about the personalities. I was shocked at the infighting and time wasting and being told that if someone has a go at you, you have a go back. I don’t think that’s how it should work,” he said.