Portlaw Musical Society celebrates 40 consecutive shows this week with its production of ‘Cinderella’
All of the glitz and glam associated with Panto season will once again descend on Portlaw this week.The productions staged by the Portlaw Musical Society have become not-to-be-missed spectacles which appeal to people of all ages in The Tannery Town and beyond. However, this year’s production is an extra special occasion as the Society celebrates 40 consecutive shows of which all involved are understandably proud.‘Cinderella’ will be staged at the Premier Hall from Thursday February 6th to Saturday February 8th at 8pm and on Sunday February 9th at 3pm. It’s certainly an appropriate choice considering ‘Cinderella’ was the Society’s very first production and was staged again in both 2000 and 2011. 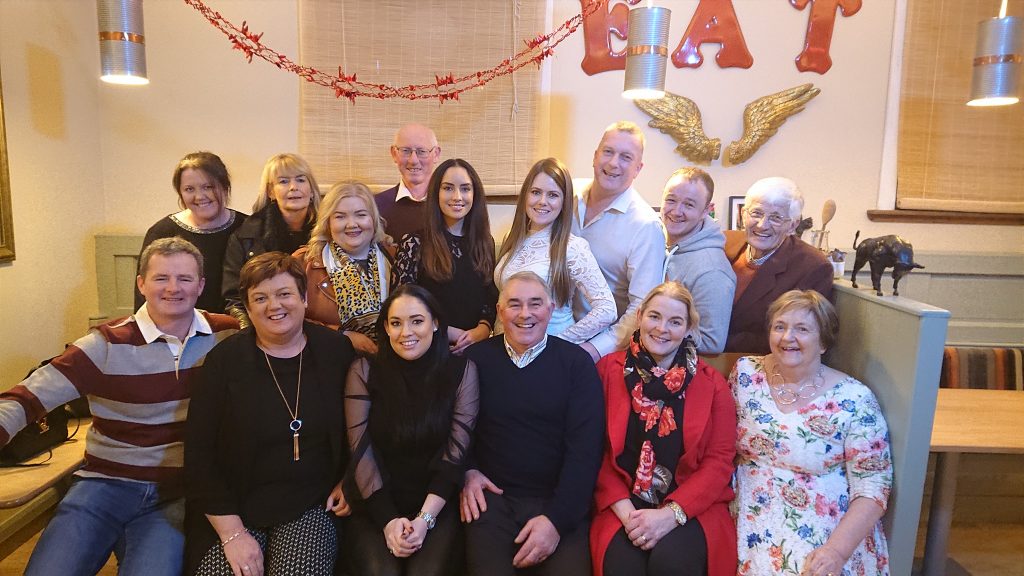 Musical Society committee and cast night out in December 2019.

History
When the ‘Tops of the Streets’ finished in Portlaw, four friends namely Freddie Laffan, Freddy Kelly (RIP), Billy Corcoran (RIP) and Bill Furlong (RIP) on the night shift in The Tannery were bemoaning the loss and determined that the void would be filled.It was obvious that there was talent in the town but the streets needed to be brought together to put an end to the rivalry which had crept into the ‘Tops’.What was the best way to tackle this? A public meeting was held in October 1980 and Portlaw Musical Society was born.Over the years, a multitude of people with a love of music and comedy have come together each year, always with one goal in mind – singing, performing, fun, friendship and nurturing young talent to carry on a proud Portlaw tradition.
It’s not all about those who take to the stage, as non-performers are also very welcome and a necessity to keep the show on the road. The behind the scenes work is just as important and contributions are needed from many people in order to ensure success each year.Young people are also key to the current and future growth of the Society and this is something which all involved are very much aware of.After a very successful 30th pantomime, society members Stephanie Maguire and Lillian Keyes decided that they would like to encourage and nurture the talent they could see in the young children of Portlaw.They started rehearsals in March 2010 and successfully performed two magnificent musical drama pieces ‘Billy no Buzz’ and ‘The Slumber Party’ in the Summer Variety Show. 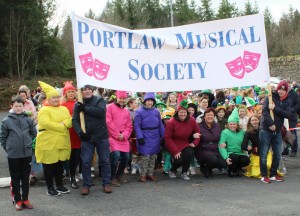 Keen to build on the success of this, they decided that they would officially start a Junior Musical Society.On September 22nd 2010, the Portlaw Junior Musical Society was officially born when the children had their first rehearsal with a staggering 90 members.
The Junior Musical Society also affords an opportunity to new children to the community, such as those who do not attend the local school, to interact with others their age. All of this helps to enhance the community spirit of Portlaw.
2020 Production
This year’s ‘Cinderella’ Production Team consists of Damien Walsh (Director), Damien O’Brien (Musical Director), Claire Cully (Chorus Mistress/Rehearsal Pianist) and Sharon O’Brien (Choreographer). As usual, the cast consists of hugely talented individuals who are proud to be associated with the Society.
Dervla Walsh – ‘Cinderella’
Dervla has a long standing passion for both dancing and singing . She was on stage with both the children’s and senior chorus between 1996 and 2007. She choreographed the 2013 and 2014 pantos. Her has a proud Irish dancing background. She is dedicating her performance to her grand uncle Billy Corcoran, one of the Society’s founding members. 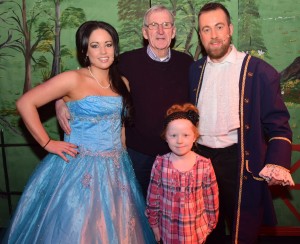 Jenny Larkin (Beauty) Nicky Cummins, Jamie Power (The Beast) and Erica Larkin pictured in the Premier Hall for ‘Beauty & The Beast’ in 2015.

Fred Kelly – ‘Buttons’
Fred is a natural actor which is no doubt in his genes. He is son of one of the founding members Freddy Kelly. He has been on the stage many times over the years in various productions. His three daughters Sarah, Emily and Lauren also perform on stage with the Junior Musical Society.
Stephanie Maguire – ‘Chick’
Stephanie has a wealth of acting experience and has also taken part in drama productions with the Dawn Players in Ballyduff. She has choreographed numerous productions in Ballyduff NS where show works. She is founder of the Junior Musical Society along with Lillian.
Darren Butler – ‘The Prince’
Darren first joined the Portlaw Musical Society with a part as a dwarf in ‘Snow White and the Seven Dwarfs’ nearly 15 years ago and since then he hasn’t been able to resist the urge to return each year and has played a variety of different roles.
Johnny Walsh – ‘Grab’
Johnny began his pantomime involvement in 1992 in the children’s chorus. From 1998 onwards he played a number of principal roles including Muscles in ‘Sinbad’. He has taken regular sabbaticals but returns refreshed to play varied roles. This year he is the ‘Grab’ element of the Smash and Grab duo.
Emmett Cullinane – ‘Dandini’
Emmett has been involved with pantomime on several occasions and has also acted with the Dawn Players in Ballyduff and, when time permits, enjoys taking a principal role. He has previously played Kasim in ‘Ali Baba and the 40 Thieves’, Lord Chamberlain in ‘Sleeping Beauty’ and takes the part of Dandini in this year’s show.
Rachael Butler – ‘The Baroness’
Rachael takes on her fourth principal role but has been part of the Society for many years doing make-up. She joined the committee three years ago and is PRO/Assistant Secretary this year. Rachael has also helped out with the Junior Musical Society.
Niamh Doherty – ‘Nugget’
Niamh, a primary school teacher in Butlerstown, joined Portlaw Musical Society in 2005 when she played the lead role ‘Snow White’. She has played principal roles in various pantomimes since then and is delighted to be returning this year as ‘Nugget’. Niamh has been a member of the committee since 2007. She is also one of the tutors in the Junior Musical Society and enjoys passing on her love of the stage.
Lillian Cleary – ‘Fairy Godmother’
Lillian first appeared on stage in the Premier Hall in the children’s chorus in 1993. In 1997 she progressed to the senior chorus. In 2002, in her tenth panto, Lillian made her acting debut as Beauty in ‘Beauty and the Beast’. She has enjoyed playing a number of principal roles since then. Along with Stephanie, she is a founder of the Junior Musical Society.
David Walsh – ‘Smash’
David was on stage for the first production of ‘Cinderella’ and has been both on and off stage for nearly every production since. He has played many varied roles over the years but is best known to play the evil villain.
Lisa Kelly – Schoolteacher
Lisa is a New Ross native and has been involved in the Society since coming to Portlaw. This year marks her stage debut in the company of her three daughters and husband! Lisa is naturally musical playing with the New Ross Brass Band.
Declan Clune – Landlord
Declan is Vice Chairperson and has served on the committee for a number of years. He made his stage debut last year and returns again for this production. He says he’s delighted to share the experience with his daughter Sophie Mae who is in the children’s chorus.
Monica Kelly – Villager
Monica is daughter of one of the Society’s founder members Freddy Kelly. She made her stage debut two years ago as a golden fairy in Sleeping Beauty and loses the magical element for a villager role this year.
A proud community
Stephanie Maguire, who takes to the stage as ‘Chick’ this year, has been attending Portlaw pantomimes since she was a child. “My greatest memories are of watching my uncle Freddy on stage along with my other uncles Michael and Paul participating in the chorus. I never missed a night. I went every night that it was on,” she explained.“Owing to the rules of the time (your parent needed to be involved to gain admittance to the chorus) I had to wait until I was fifteen to take part. It broke my heart not to be able to get on stage when I was little but once I started that was it. I haven’t missed taking part for the past twenty-five years!”
Stephanie says every household in Portlaw has had some form of involvement over the years and she praised the community spirit which the Society creases. 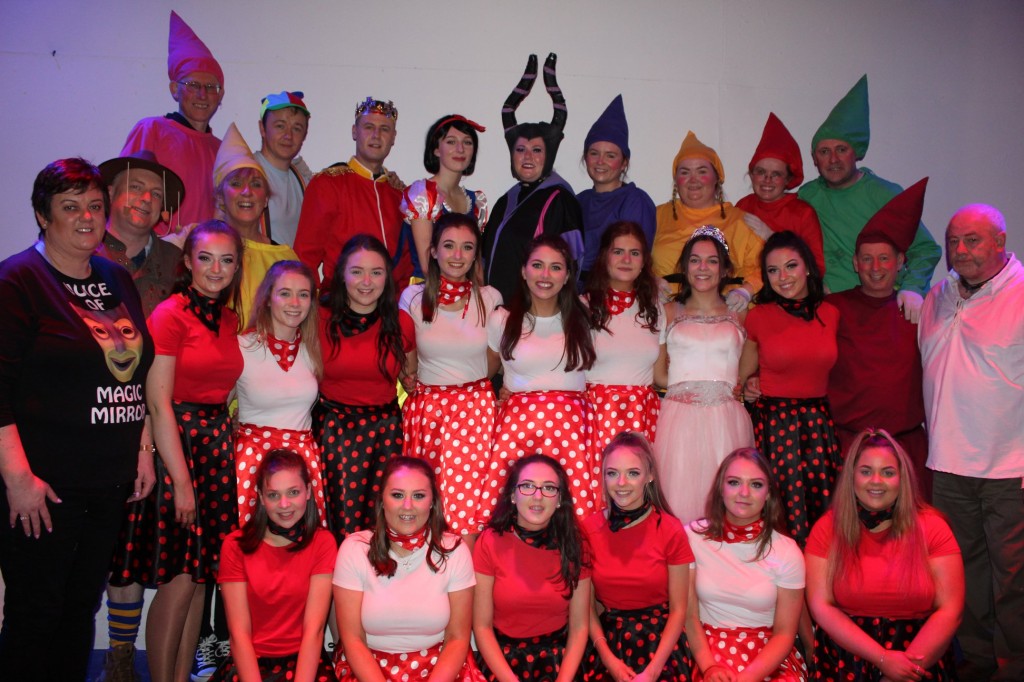 Cast members in the 2019 production of ‘Snow White and the Seven Dwarfs’.

“I’m also very proud of the fact that I co-founded the Junior Musical Society which celebrates its tenth anniversary this year. I feel I am keeping a family tradition alive as uncle Freddy was one of the founder members of the Society.” For Hazel Robinson of the Junior Musical Society, and long-term committee member of the Musical Society, her involvement is also a source of great personal pride. “While a native of Portlaw, I moved away 14 years ago but my involvement with the Musical Society and the Juniors has helped to keep me in touch with the community,” she said.
“My involvement in the Junior Musical Society came about when my children became members. I have responsibility for costumes and props for our various shows. It’s something I’m hooked on at this stage! And my involvement provides a link with my hometown that is very special to me.”Jenny Keegan, former principal and current choreographer for the juniors Rock and Roll group, first took to the stage along with her twin sister Emma Larkin in the children’s chorus as a member of the Mulcahy Bible School of Dancing in 1996 as part of that year’s production of ‘Snow White’. “From then on I was hooked and my love of performing began,” she explained.
“Every member of my family has been involved for many years now and we continue to help out in different capacities whether it is backstage, front of house, choreographers or working with the juniors. Being part of this Society is a great opportunity for everyone, young and old, in our community to come together and have a shared experience.” It is indeed a credit to the efforts of the original committee that the Portlaw Musical Society has never missed a season and is still going as strong as ever. The fact that this year’s stage will once again be occupied by such a variety of ages shows that this Society is an intrinsic part of life in Portlaw and something which all in the area take justifiable pride in.
Here’s to the next 40 years!
Tickets for Portlaw Musical Society’s production of ‘Cinderella’ can be booked by calling 086-0519210