Home » Opinion » Foley on File » Friends of the community

Friends of the community

The Friends of St John’s River voluntary group are continuing their admirable efforts in promoting and preserving the area in and around St John’s River, Kilbarry
A GROUP of proactive citizens are showcasing community spirit and volunteerism at its best through their efforts in improving a local amenity. The Friends of St John’s River group have been working tirelessly to maintain and promote the area in and around St John’s River, Kilbarry for the past number of years. Volunteers meet as a group each Saturday morning and conduct litter picks; remove objects from the river; and carry out any other work they deem necessary. Additionally, volunteers can regularly be seen working individually on weekdays.
This haven of tranquillity, which has an entrance opposite Kingfisher Club on the Tramore Road, provides a wonderful piece of the countryside amongst the hustle and bustle of the city. 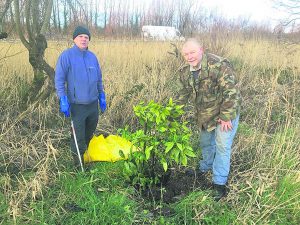 “People are coming from all over the city and beyond and they always comment on how clean the area is,” said Secretary with the Friends of St John’s River Donal Barry.In recognition of their efforts, the group were regional winners in the 2017 Waters and Communities Award, sponsored by Inland Fisheries Ireland, Waterways Ireland and the Local Authority Waters and Communities Office.The group were also recognised when The Munster Express showcased their efforts as part of the ‘Get Involved’ Sustainable Communities Initiative some years ago.
“Proof of volunteerism at its best can be seen at St John’s River walkway by Cherrymount Bridge out as far as Sheep’s Bridge,” says Cllr Breda Brennan (SF).
“That whole stretch has been transformed. Yes, fair play to Waterford City & County Council they put down the basics and they made the walkway passable. But a huge amount of work has taken place to make it what it is today. It’s an absolute credit to the lads. They’ve used their own time, effort and energy.”The Friends of St John’s River have already made huge progress and achieved many of their objectives but there are a number of other projects that they would like to see come to fruition. Volunteers say there is huge potential to have the Waterford Greenway extended to Tramore, which would incorporate the walkway along St John’s River. They believe a section of railway line could perhaps be included to serve as a reminder of the Tramore train which many people in Waterford still have fond memories of.
Illuminating the bridges along the river is another option which is being explored, with volunteers looking at what has already been achieved in other areas where similar projects have been undertaken. 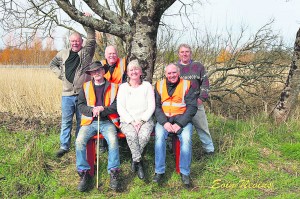 They would also like to see a section of the riverbed at the Waterside dredged.
Improving the visibility of the river from the People’s Park is also a key objective as is the removal of growths on the river all in the Johnstown area. Additionally, improved access from the Bolton Street direction is also being sought. Pollution in the river is an ongoing issue, particularly between Cherrymount Bridge and Blackrock. Eoin Nevins explained that swimming events often took place on the river in yesteryear.“These swimming rallies were real social events,” he explained. Eoin highlighted that the River Seine in France was recently re-opened to swimming for the first time in decades following huge investment in a clean-up operation.
He would like to see a similar situation occurring at St John’s River.
“We wouldn’t currently recommend swimming in the river, but we’d like to see it getting to the stage where you perhaps you could,” he said.There were ambitious plans to promote boating along the river (from Scotch Quay, through Johnstown and into Kilbarry) and a number of boat gatherings took place in order to showcase such possibilities.However, these plans were unfortunately scuppered by the bizarre construction of a flat bridge across St John’s River at the Waterside by the new Gasworks car park. At the time of its construction, Waterford City & County Council were informed about the impact this would have on future plans to open up the river for boating activities.Despite the issue being raised at numerous Council meetings, concerns fell on deaf ears and the flat bridge remains in place.
“It still annoys me. There was no foresight,” said Cllr Brennan.“The reason the other bridges on the river are arched is because our forefathers thought of what was passing along the river.” Despite this setback, the Friends of St John’s River are grateful to the Council for the support which has been shown towards their other activities. However, they all believe there is a need for a wider change in outlook in Waterford so that the river is viewed as a key resource.They are keen to promote the maritime heritage of Waterford and say the river represents “the heart of the city”.Cllr Brennan said there is a need to use the river “as an asset”, pointing out that other cities have much smaller amenities but promote them much more significantly.
The natural beauty of the river area, particularly around Kilbarry, has been highlighted through wildlife walks which have been conducted by Albert Nolan, wildlife columnist with The Munster Express.Fish stocks are being monitored and there is an aim to encourage more wildlife back to the area. Kingfishers have been seen around Kilbarry on a number of occasions. In an attempt to promote such activity, volunteers have installed bird boxes, bat boxes, insect hotels, planted a couple of hundred native trees, several thousand daffodils, and wild flowers which are insect friendly.Every so often, the Friends of St John’s River hold a large event and the next challenge is to remove a big tree from the river – something which they hope to have all hands on deck for.
“Some jobs are just too big for us,” explained Eoin. “If anyone else wants to volunteer, we’d love to see them coming along and getting involved. There are huge benefits from doing voluntary work. You’re out exercising in the fresh air.” Volunteers all enjoy the social aspect of their efforts and say there is an immense sense of satisfaction from observing a job well done. “At the end of day, these are a bunch of volunteers,” said Cllr Brennan. “At Council meetings, I constantly hear Councillors asking for someone to clean here and clean there. All it takes is a couple of like-minded individuals to get together and say they are going to improve an area and then set about doing it.”