Home » Opinion » Tales of the Tellurians » Full steam ahead for Technological University?

Full steam ahead for Technological University? 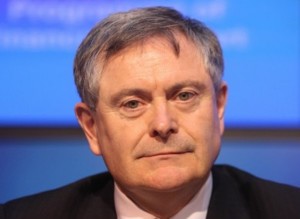 Doing the business for Wexford - Minister for Public Expenditure and Reform, Brendan Howlin.

As far as most people in Waterford are concerned, discussions are still ongoing between WIT and CIT about a possible merger and the creation of a Technological University serving the South East region.
However, our friends in Wexford appear to be under no illusion that the university will definitely happen and last week they were celebrating the announcement of a brand new campus on a green field site in the town.
Carlow IT has had a small campus in Wexford since 1995 currently catering for about 850 full-time and part-time students. But, last week, Minister Brendan Howlin announced that the Higher Education Authority had granted permission to CIT to acquire a 35-acre green-field site on a prime location in Wexford Town for the development of a new campus.
Mr Howlin, one of the most powerful ministers in the government coalition, also thanked his colleague, Minister for Education, Jan O’Sullivan, for her support in securing finance to purchase the site.
“This announcement puts higher education on a firm footing in Wexford and this is the first step in the delivery of a Technological University for the region,” declared Mr Howlin.
Congratulations to our friends in Wexford and you can’t blame Brendan Howlin for looking after his own. Mind you, if I had been asked about such a development when the government first took office and when the influential Phil Hogan was taking such an interest in third level education in the region, I would have been of the opinion that such a development would have been earmarked for Kilkenny. Funny how things change isn’t it?