Mna na Déise Women’s Health Group is a Women’s Health Information Community Group in Waterford
Members of a local group are striving to support and empower women in relation to the issue of healthcare. Mna na Déise Women’s Health Group was founded two years ago in the wake of the CervicalCheck scandal which shocked the nation. Co-founder of the group Cathriona English was keen to take action as she was appalled by what had transpired.
“A couple of us got together as we wanted to raise the subject with the public to highlight what was going on and what it was doing to all of those women who were affected,” she explained.

The group’s activities, which are organised via social media, kicked off with a well-attended protest in Arundel Square which highlighted issues of concern. This was followed by an art weekend entitled ‘She Stood in a Storm’ at The Rogue Gallery on Michael Street, with the CervicalCheck scandal as the core theme. A special talk was held in The Parlour Vintage Tearooms on Georges Street with campaigner Vicky Phelan as the guest speaker.
“That was great and really gave us the push we needed,” said Cathriona.
Subsequently, the group began to address other aspects of women’s health.
“We try to cover as much as we can and anything that is specifically related to women’s health,” explained Cathriona.
“Our aim is to educate people and let them know what’s going on around the country. We encourage women to contact us if anyone needs help and we will help them in any way we can.” Another event, aimed at highlighting the injustices associated with the Magdalene Laundries, saw the placement of babies’ shoes outside the Good Shepherd Convent, Waterford as part of a remembrance vigil.
Social media growth
The Mna na Déise group revolves around a Facebook page which has 1,350 members and consists of all ages and women from a variety of different backgrounds.
In addition to Cathriona, there are four other administrators operating the page: Haide Vysniauskaite, Casey Dunne, Vivienne Burns and Maria Daniels. 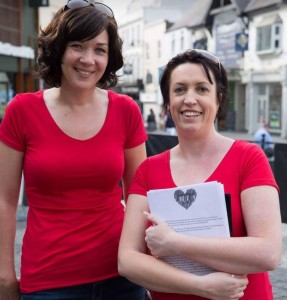 Margaret Julian and Cathriona English pictured at one of the events organised by Mna na Déise to highlight the CervicalCheck scandal.

Cathriona describes the group as a place where women can voice their concerns and seek advice on any particular issues which are concerning them. Because of its success and the favourable feedback received, Cathriona now wants to take the project to the next level.
“We were talking about having a physical group for the last few years, but we didn’t get time due to other commitments. Now, we’re saying it’s time to get it done.”
She hopes to use what the group has already achieved through social media as a platform to further expand and to create a valuable social outlet by having regular gatherings.
“People now know what we are about and what we’re doing so hopefully that will encourage others to join,” she says.
Cathriona is also involved with the Waterford Women’s Centre on Manor Street in the city and says she is inspired by what has been achieved there. Her aim is to keep health as the main focus for the group and to provide a support network for all who seek such a service. “It’s about education and raising awareness,” she explained. “We need to keep things out there and help women to help themselves and help each other.” Cathriona believes it’s important to promote empowerment amongst women and is delighted that she has already noticed positive changes.
“Women are getting stronger and they are not accepting things such as going to the GP and being told ‘you’re not sick’ when they know they are. Women know their own bodies, but you have to build strength to keep asking questions.” Cathriona and her fellow administrators of the Facebook group meet once a month and talk about what’s going on and discuss future plans.They have embarked on fundraising efforts, including an art auction at GOMA on Lombard Street, and they also hope to secure some funding in the near future.
Members are keen to give back to the local community and, in advance of Christmas 2019, teamed up with The Helping Hand charity which provides help to the homeless and struggling families in Waterford. As a result of their efforts, 150 children received presents and many families received food hampers.
Open night
In an attempt to raise further awareness and attract new members, an open night was held by Mna na Déise on Thursday January 30th at the Butler Community Centre in St John’s Park.
It’s hoped that there will be a different talk on a different subject matter each month. Along with being educational, the talks also provide an important social outlet. The first (with Cathriona as the speaker) consisted of a health and wellness event which explored the subject of relaxation and useful techniques for relaxing. Cathriona says she was delighted with how successful the night was. “It went brilliantly well,” she explained.
“I never expected so many women to turn up. We had 20 women who came from all over Waterford, and as far out as Passage East. The feedback at the end of the night was hugely positive, with everyone looking forward to the next event.” She added: “If two or three people had come on our first night, I would have been happy. But 20 people on the first night really shows the need for a Women’s Health Information Community Group.”
Later this month, Haide Vysniauskaite will host a nutrition night which isn’t aimed at losing weight but at highlighting the benefits of different foods and providing information for women on keeping their bodies healthy. March will see Vivienne Burns use her expertise to speak about issues related to housing such as rent, mortgage arrears, the role of the Money Advice and Budgeting Service (MABS) etc.
Menopause night will be held in April with a talk by Breda Birmingham. Mna na Déise also hope to run a day trip to Castlemartyr, County Cork in March to celebrate International Woman’s Day, and anyone interested in attending is asked to get in touch. Cathriona has thanked everyone who has helped with the group throughout the last two years in anyway, especially Leslie Hughes who was involved in the initial stages and who she described as “my right-hand woman”. For Cathriona, Mna na Déise is a labour of love. “I’m obsessed!” she says, adding that she is incredibly proud of what has already been achieved.
“Getting messages from people saying ‘thanks so much, you’re doing great work’ makes it all worthwhile.”
With so much enthusiasm and determination, we’re sure to hear much more from Mna na Déise in the future as they continue to provide a positive and supportive service for local women. Keep an eye on the Mna na Déise Facebook page for details of each upcoming event.