A fantastic pantomime set on the Waterford Greenway was recently staged at the impressive Gealach Gorm Theatre in Kill village. The intimate arts venue has become a most welcome addition to rural Mid County Waterford.
The Gealach Gorm Theatre at the Kill Community Centre in County Waterford has become a hugely popular arts venue.
However, succeeding in creating such a venue in rural County Waterford was no mean feat.
Angela Mulcahy, who is originally from Kilmeaden but has lived in Bonmahon for many years, was one of the driving forces behind the development of the impressive 62 seat theatre which was constructed on a disused squash court back in 2005.
She has been involved in drama all her life and completed a Higher Diploma in Drama and Theatre in Maynooth.
In an interview with this newspaper a number of years ago, she outlined the background to the development of the Gealach Gorm Theatre and the Trojan work which was undertaken in order to create such a venue. 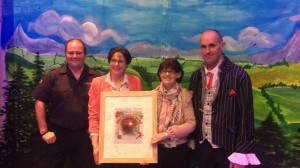 Angela outlined how, during a stage lighting course as part of her studies, she visited a small theatre which had been built onto the side of a church in the village of Prosperous, County Kildare.“I thought ‘if they can have this in Prosperous, we can have it in Kill,” explained Angela.
Angela was a regular user of Kill Community Centre through her involvement with drama groups.
However, she was consistently bugged by the presence of the squash court which was full of rubbish and wasn’t being utilised.
She approached the hall committee about the possibility of creating a small theatre and enthusiastically set about turning her vision into reality with the assistance of many others along the way.
While the hall in the community centre is of ample size (and is well known to many throughout Waterford and beyond thanks to the famous Kill Disco), Angela wanted to create a different experience by staging performances in a more intimate venue with improved acoustics and comfortable seating.
An architect visited the centre to examine the proposed location and plans gradually progressed.
Angela was fortunate to receive assistance from Ciaran O’Neill of The Forum who provided seating which was no longer required at his venue.
A number of fundraising events were held locally which were well supported and plans eventually fell into place, with the theatre eventually opening in 2005.
Since then, it has hosted many different visiting groups, a number of variety nights and the very successful Gealach Gorm Singer/Songwriter Festival which has become an annual event and a popular fixture on the local social calendar.
The idea for the Gealach Gorm Singer/Songwriter Festival originated through Angela’s son Anthony who is a singer/songwriter based in New York.
He had come home to Waterford while launching his first album and, during a journey back to the airport, a chat ensued between Anthony and Angela about original music and how to encourage more people to visit the local theatre.The idea for developing a festival soon began to formulate.
What started as an idea to run a small singer/songwriter festival over a weekend in February 2012 which would hopefully bring original music performers together turned into an event that surpassed their wildest expectations. 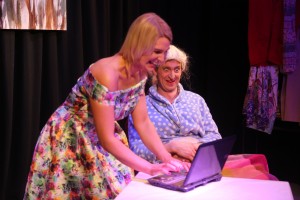 “We were absolutely blown away by the reaction of a rural audience to an art form which they would have had very little exposure to in the past,” said Angela.
Since its inception, participants in the Gealach Gorm Singer/Songwriter Festival have included many Irish and international artists including well-known names such as Cork’s John Spillane and Waterford’s Karan Casey.The Gealach Gorm Theatre is primarily used for the activities of drama groups, including hosting many classes for children, and is not a commercial venue as such. The venue allows local people to display and hone their skills without the need to travel to larger urban centres.
“We have a huge amount of local talent,” said Angela.