Growing numbers of people with no place to live

For the most part, Fr Peter McVerry is associated with the battle against homelessness in Dublin but, last week,
the respected Jesuit was speaking up the road in Carlow at the launch of a report into homelessness in the town. He predicted that, before too long, there would be a nightmare scenario of families living in town parks and Garda stations. Fr McVerry said the three parts of the housing system, private houses, social housing and private rented housing, were all in disarray and if even a fraction of the 42,000 mortgages currently in arrears led to homes being repossessed, a nightmare situation would unfold all over Ireland. 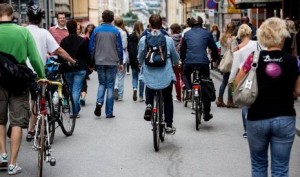 Most homelessness was hidden, said Fr McVerry, so it was very easy to ignore and pretend it didn’t exist.
For some time now, it is my humble belief that successive governments have failed to read the housing situation correctly. The present government is spending a lot of money but they persist in the belief that the ‘market’ properly managed will fix the problem.That scenario is not working and every year more and more people are being marginalised and all that goes with such a situation. Thankfully, there is no serious tradition of mass violent protest in this country but it’s not inconceivable that a lot of people will have watched the recent marches in France and wondered, what if?

When people have decent housing and opportunities for themselves and their children they don’t really care what the better off and wealthy have and do. But when their backs are up against the wall . . .
In the 1950s and 60s, in a relatively short time, local authorities all over the country built vast numbers of good houses for people who couldn’t afford to buy their own but who paid rent according to their means. The need to re-embrace that policy is even greater now.