WELL-KNOWN and popular Faha resident Nellie Casey recently celebrated her 90th birthday with family members.A party was held in her honour at Teach Altranais Charna in County Galway where she now resides and receives loving care and attention. 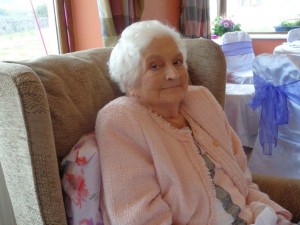 Originally from Aherlow, County Tipperary, Nellie moved to Faha, Kilmacthomas after marrying her husband the late Paddy and became an integral part of the local community.Nellie took great pride in supporting Faha GAA Club at every opportunity and was a regular at all of the club’s matches. For many years, Nellie was also heavily involved with her local branch of the Society of the Saint Vincent de Paul. 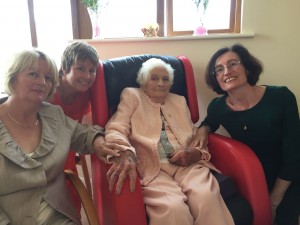 Nellie pictured with her daughters Catherine, Helen and Mary.

On her birthday, in recognition of her many years of dedicated service as sacristan of Church of the Sacred Heart, Faha, Nellie was presented with the prestigious Benemerenti medal which is an honour awarded by the Pope to members of the clergy and laity for services to the Catholic Church.Nellie is regularly visited by her family members from Waterford, who also made the journey to Galway to join with her in celebrating her birthday. Her friends and neighbours in Faha send Nellie congratulations and best wishes on her special occasion.
Although she may no longer be living in the area, she continues to be held in high esteem and is always thought about fondly.