Higgins is Poised for Áras Return

It looks very likely that Michael D Higgins will be returned to serve a second term as Uachtarán na hÉireann following Friday’s Presidential Election.
President Higgins has served both the office and this country well, and given the many centenaries that lie ahead, be it the First World War Armistice, the War of Independence, the Civil War and the foundation of the State, he feels like the most suitable person to guide us through those many commemorations.
He is also widely seen as a safe pair of hands and has probably been assisted by the poverty of the candidates who have attempted to run against him in recent weeks.
In our view, the opposing field simply hasn’t strong enough and didn’t come to the campaign with a lengthy and established record in public service.
And the disproportionate airtime and column inches afforded certain candidates who may ultimately win single digit support is as much an indictment of the media that afforded such publicity seeking the oxygen it never deserved. 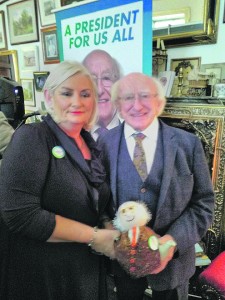 Kathleen Stone of Portlaw pictured presenting a knitted Michael D. Higgins to the President made by the Clodiagh House knitting group, Portlaw during his visit to Waterford City on Friday last.

The TV debates have served some purpose in at least highlighting the expense involved in running the Office of President, and is worthier of our scrutiny away from the white noise of an election campaign. The First Citizen ought to be funded appropriately, but if we are to live up to the ideals of political republicanism as that espoused, for example, by the founder of the United States, we may also be required to prioritise our national priorities. This ought to form part of a wider debate which the next President should at least be a commentator upon, albeit within the constraints as laid down by the Constitution. And it would also come as a help to the public if those who contest the next election in 2024 both read and understand Bunreacht na hÉireann before deciding to put themselves before both our local authorities and, in turn, the people of Ireland.
That all the political parities with the exception of Sinn Féin did not field a candidate shows a tremendous level of apathy on behalf of Fine Gael (described by Taoiseach Leo Varadkar as the “United Party” and, for the second successive election, Fianna Fáil (“The Republican Party”). Clearly they did not fancy being subjected to a hammering at the polls given President Higgins’s popularity, but, on a pragmatic footing, decided to save their funds for the pending Local and European Elections, as well as taking the next general election into account.
Why did we end up with three people from a TV show running for the office? It’s difficult to fully ascertain why any of the ‘Dragons’ genuinely believed they could make a better fist of the office than the incumbent, with all speaking to varying degrees about the ‘powers’ of an office which, in reality, do not exist.
The Blasphemy Referendum (remember that?) is unlikely to excite to many people going to the polls on Friday and given how this law has rarely been used, one has to wonder why bother with this vote at all. We wish Friday’s candidates well, but will also be relieved to see this largely lacklustre campaign draw to a close.