Arthur Curry and his son Jordan will depart Ballyduff this Saturday August 4th as part of a poignant trip to Rome in memory of his late mother.
A LOCAL father and son will embark on a challenging cycle through Europe this week bound for the Eternal City. Arthur Curry and his teenage son Jordan will depart Ballyduff on Saturday August 4th and set off on a 2,880km trip to Rome. Arthur decided to embark on the cycle in memory of his mother who died in January 2017. “She was our rock and her passing has left a huge hole in our family’s lives,” he explained.“She held us all together through the highs and lows of life and is missed dearly.” 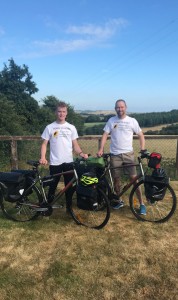 Jordan and Arthur Curry preparing for their ‘Home to Rome’ challenge.

Arthur says he was lucky to spend time with her in University Hospital Waterford (UHW) before she passed away. “We chatted about all sorts and lots of promises were made,” he explained.
During this time, Arthur asked about things that she may have wanted to do during her lifetime but never materialised. “She was well travelled but never got to go to Rome,” he explained.
Although Arthur has been to other parts of Italy, he has never been to Rome either so made a promise that he would embark on a cycling expedition to the city in memory of his mother and as a fundraiser for Waterford Hospice. “She was very religious and a great community person,” said Arthur.“She was involved in so much in Ballyduff and the people of the area really did love her.”
While enjoying a walk on the Greenway one Sunday morning in January of this year, Arthur decided to proceed with his plan.
He hopes that when he visits Rome, and in particular the Vatican City, his mother will be with both him and Jordan in spirit. Remarkably, Arthur is not part of any cycling club and only purchased his current bicycle in May.Prior to that, the bicycle he had in his possession was from his teenage years.
“I thought the idea of the distance and being a novice might get attention and act as a catalyst to see if other fundraisers can be organised,” he said.
“No matter how busy you are, you need to take time out and give a little back. We are all so caught up in life’s hustle and bustle and think our loved ones will always be around. The least we can do is attempt to complete this journey in memory of this final joint promise and, as novice cyclists, attempt to raise as much as possible for the new palliative care unit being constructed at present on the grounds of UHW.”
Arthur met with representatives of Waterford Hospice at beginning of May and shared the plan for his cycle. Since then, plans have quickly progressed and he says he has been blown away by the level of support which has been shown.“We are so grateful to the wonderful people of Waterford and the South-East who have supported us and donated to date,” said Arthur.“We have been blown away by the support and donations and it makes me very proud to be part of this community and county.” The duo will be embarking on the cycle without any support vehicles and will stay in a tent as they make their way across Europe.They will depart from Ballyduff at 11am this Saturday August 4th and have set a 30 day target in which to reach Rome.
Prior to departing, Arthur says there will be a blessing at his mother’s graveside in Ballyduff which will include a couple of mementoes of sentimental value which will then also be brought to Rome.
After the blessing, Arthur and Jordan will travel to Rosslare and will then catch a ferry to Wales on Sunday morning.
They will then travel to Dover over six to seven days. 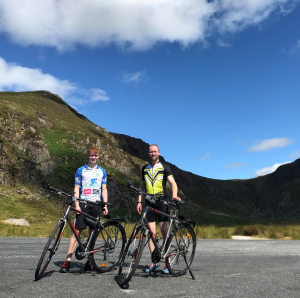 Jordan and Arthur pictured after some training up and down the Comeragh Mountains.

From Dover, they will catch a ferry to Dunkirk and will travel along the French/Belgian border, into Luxembourg, through a small section of Switzerland, into Germany, Austria, onto Italy and down to Rome. After completing the trip, they hope to see and do as much as possible in both Rome and the Vatican City and are hoping to fly back to Ireland by September 5th/6th.
“If we have enough energy, we’re hoping we can cycle from Dublin back to Waterford,” said Arthur.
Arthur modestly says that what they are doing represents a “small drop in the ocean”. “We know we won’t raise loads but every little bit will help and it will allow us in a very small way to remind the staff at every level in the hospital of how grateful the people of Waterford are for the amazing work that they do day in, day out. They are the heartbeat of the hospital,” he said.
“The dignity and compassion Mum received from both the palliative team and the UHW staff was exceptional. It’s a terribly difficult job to do. The completion of this new building will assist these people and allow them to continue providing this level of care and support to patients and their families.”