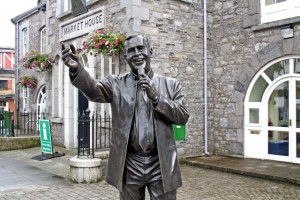 It seems the late Joe Dolan is still as popular as ever and while the authorities in his native Mullingar are very proud of their native son, the adoring fans are causing a few problems.
Joe is buried at Walshestown Cemetery and such is the constant stream of fans to his grave there are ongoing and serious parking problems for people attending services at the church. In a nutshell, there are so many fans taking up spaces in the car-park that the locals are unable to gain access.
The car-park is actually owned and maintained by the parish, not the Council, and the parish doesn’t have the money to extend the parking facilities.
At a meeting of Mullingar Municipal District Council, Councillor Andrew Duncan asked if the local authority could help but Director of Services, Martin Murray, said there was no funding available to upgrade cemetery car-parks. So, at the time of writing, the matter remains unresolved.
Meanwhile, There are always people around the Joe Dolan statue at the Market Square in Mullingar. The bronze, life-size statue, commissioned by Westmeath County Council and Mullingar Town Council, was unveiled in December 2008 and captures the performer in a trademark stage pose.
However, the statue had to be removed for reinforcement works less than two years later as adoring fans had rocked it loose by climbing up beside Joe to have their photographs taken. It was taken to a foundry in Dublin for repairs and was back in Market Square after a few weeks. It continues to be one of the most photographed statues in Ireland.