Home » Opinion » Foley on File » Lady of the Grotto

Lady of the Grotto

Ferrybank’s much loved Grotto, which is dedicated to Our Lady, is lovingly tended to by a local 92-year-old lady in what is a great example of community spirit and pride of place.
FOR Ferrybank residents, and many in the wider area, the well-known Grotto in Rockenham is a much loved focal point within the community. In fact, you could say the Grotto is to Ferrybank what the Eiffel Tower is to Paris or Big Ben to London.The Grotto depicts the Lourdes apparitions, featuring the Mother of Christ in a halo of heavenly light and St. Bernadette kneeling in front.
Following the Marian Year of 1954, plans emerged to construct such a Grotto in Ferrybank. A small committee was formed and met with then parish priest, Canon James Ryan, who gave his full and wholehearted approval of the project. The idea received great support from local businesses and members of the community. During the construction phase, huge conglomerate stones were drawn from quarries in Ballinamona and Slieverue.On Sunday 20th May 1956 the people of Ferrybank and surrounding areas attended in large numbers for a very special occasion as the Grotto was officially unveiled and blessed.
A report from The Munster Express in the following week’s edition extensively detailed the event which had taken place in “brilliant May sunshine”.
Canon Ryan officiated at the ceremony in the unavoidable absence of the Bishop of Ossory who was administering the Sacrament of Confirmation elsewhere in the diocese.
However, in a letter to Canon Ryan, the Bishop praised the “grand faith and piety of the good people of Ferrybank who instituted and have now completed this splendid work”.
In the course of what was described as “an inspiring sermon”, Rev D Hughes, who was the special preacher, appealed to all in attendance to make the Grotto a place of pilgrimage and prayer.
A procession took place which included eight priests from neighbouring parishes as well as local school children and parishioners, the Mayor of Waterford Mr. T Gallagher, the City Manager Mr. Liam Raftis and the President of the Chamber of Commerce Mr. E. J. Aylward. 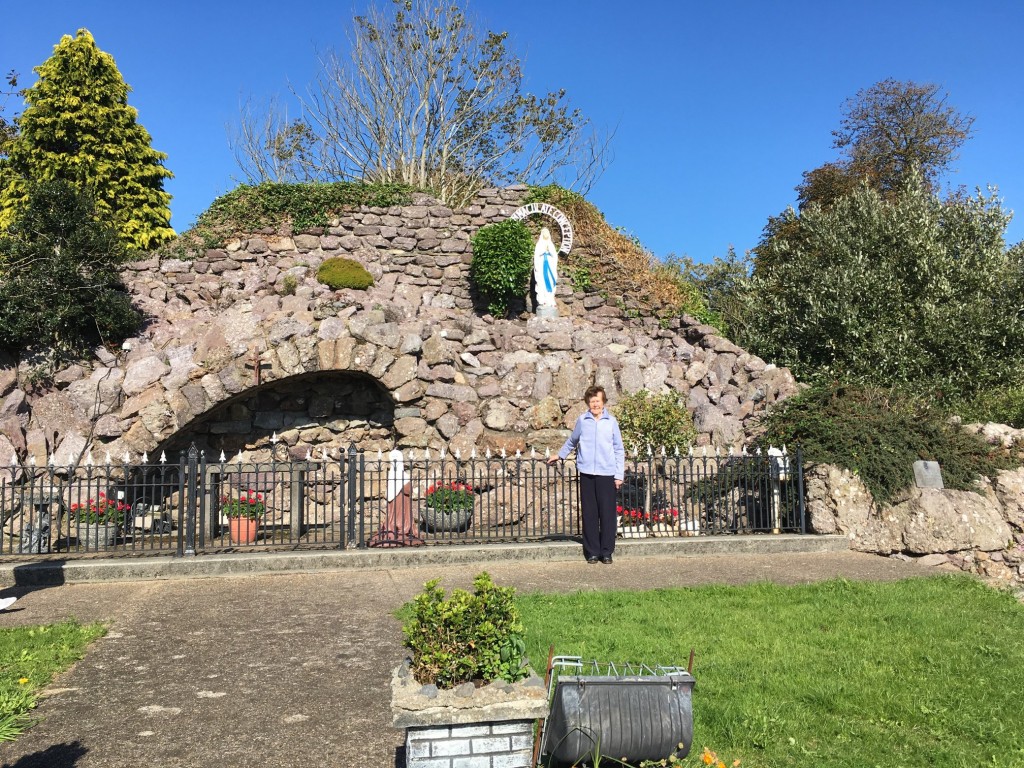 Mary O’Carroll (92) pictured at the Ferrybank Grotto which she has lovingly tended to for many years.

More than 60 years later, the Grotto still stands in pristine condition, lovingly tended to by loyal parishioners since 1956.Over the years, various people have taken responsibility for maintaining this special landmark. The original Ferrybank Parochial Grotto Committee members were: Mr. J. Sinnott, (Chairman); Mr. Eddie Carroll (Hon Sec); Mr. T Ryan (Hon Tres) and Messers M. Rellis, P Conroy, J Marshman, P Hayden, P. Moore, J O’Donoghue, J. Power, Ed Breen, D Corbett and T Sadlier.One lady who is now most closely associated with the Grotto is Rockenham resident Mary O’Carroll (née Treacy) who is wife of the late Eddie Carroll (the aforementioned Hon Sec).Mary’s brother Dick was also heavily involved in the maintenance of the Grotto for many years. Mary, who lives in the house opposite the Grotto, took up the baton when Dick died in the early 1980s.Her family have been an integral part of life in Ferrybank for decades, as her sister Brigid ran the popular shop which was located opposite the Grotto.
The shop, which was as much a Ferrybank landmark as the Grotto itself, closed after Brigid’s death in 2007. Now aged 92, Mary continues her proud association with the Grotto and can often be seen at this special location. She decorates the Grotto with colourful lights each Christmas and begins her work in well in advance in November each year.
Mary’s niece Kathleen says the Grotto can probably be seen from outer space such is its brightness each festive season. Remarkably, the Grotto has always been hugely respected and hasn’t been subjected to repeated acts of vandalism – as is unfortunately the case with some similar landmarks which are targeted by those intent on engaging in anti-social behavior.
“Maybe they’re afraid of Mary!” suggests Kathleen. Clearly, Mary commands great respect within the community. She admits she has often had occasion to tell youngsters to get down off the Grotto but her calls have always been respected.
Undoubtedly, the Grotto looks incredibly impressive and the care and attention which it receives is clear to see.Its prominent location alongside such a busy road ensures that it has a wide audience and its immaculately maintained appearance certainly entices people to stop by. Many buses regularly stop at the Grotto and people can often be seen enjoying a quiet moment of reflection or lighting a candle. Groups departing Ferrybank on outings also regularly use the Grotto as a meeting place, pick-up and drop-off point. “When people ask ‘where are you getting the bus?’ the answer is always ‘down at the Grotto’. Everything is ‘down at the Grotto’,” says Kathleen. Visitors to the Grotto in Ferrybank will also notice a flat piece of rock which came from the Grotto in Lourdes and which has the inscription: “Piece of rock on which Our Lady stood in Lourdes 1858”.
As part of the 1956 ceremony, a vault was built into the Grotto containing newspapers, coins and other items from the time. The committee hired a cameraman to film the occasion and there are still some copies of this in existence today.The maintenance of the Grotto continues to receive constant support from locals in what is a great show of community collaboration.For example, electrician Barry Hickey has been offering his services for many years on a voluntary basis as has Gerry McGrath who regularly helps out.
Undoubtedly, the care, maintenance and overall respect which the Grotto receives, and the ongoing efforts of 92-year-old Mary, perfectly highlight the importance of community spirit and pride of place.The Grotto stands as a lasting legacy to the efforts of all those who undertook the project more than 60 years ago and will hopefully continue to be cared for and respected by all in the local community for many years to come.