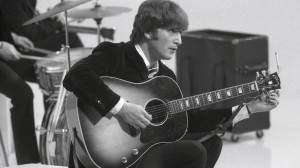 John Lennon playing his J-160E Gibson guitar that was discovered after being lost for 50 years.

The acoustic guitar John Lennon used during the recording of The Beatles’ ‘I Want to Hold Your Hand’, ‘She Loves You’ and other songs sold at auction last week for $2.4 million.
Lennon purchased the 1962 J-160E Gibson acoustic guitar in September of 1962 for £161 which was big money then.
The price achieved was significantly higher than the estimate of $600,000 to $800,000 put on the instrument.
The story goes that the guitar went missing during a Beatles’ Christmas Show in London in 1963.
Without knowing its history, an amateur guitarist and collector purchased the guitar in San Diego in the 1970s for a couple of hundred dollars and it was only identified and authenticated as the ‘Missing Lennon Guitar’ last year.
I am not aware of the legal situation regarding ownership of the instrument and the identity of the seller of the guitar has not been disclosed.