Home » Opinion » Tales of the Tellurians » Letting the Tramore air refresh the privates! 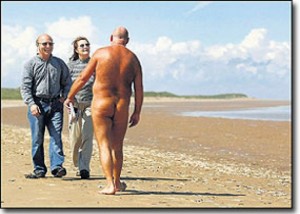 Some walkers on Tramore Beach were surprised to meet naturists who were also out for a stroll and taking the air.

There wasn’t much publicity about it because the organisers wanted to avoid the newspapers and possible controversy but, two weeks ago, there was a Naturists Convention in Tramore.
Everybody had a great time and the good weather meant the naturists were able to hold many of their lectures ‘au naturel’ on the beach.
Afterwards, the participants had the pleasure of allowing the fresh, sea air ripple through the bodies before enjoying a mass skinny-dipping experience.
Signs were erected half way down to the Sand Hills advising the public that naturists were present so that anybody who didn’t want to observe nudity could avoid the area.
The Convention was a great success and there were only a few little hiccups along the way. Some strollers on the beach didn’t see the warning signs and were surprised to come face to face (so to speak) with nude walkers.
One afternoon, two middle-aged couples (British and Swedish) wandered back down the beach and marched into the T-Bay Surf Centre for coffee with, in the words of one witness, “all their bits swinging and hanging in the breeze”.
The T-Bay customers (sophisticated and suave) paid them no heed but, in the end, the naturists had to leave because several of the regular dogs (the four-legged variety) wouldn’t stop barking at them!
The only really awkward incident came when a totally naked woman opened the back door of a taxi parked outside McCarthy’s Sandcastle Shop, plumped herself down and instructed the driver to take her to The Majestic Hotel.
The taxi driver turned around and kept staring the woman up and down. “Excuse me,” snapped the woman,” you are making me very uncomfortable looking at me like that. Have you never seen the beauty of a naked body before?”
“I certainly have,” replied the taxi driver indignantly, “I’ve seen lots of naked men and women but what I’m trying to figure out about you is where you have my fare!”