Liam Dwyer Rolls Back the Years for Peace

Congratulations to Carrick-on-Suir veteran singer and entertainer, Liam Dwyer, on his new single that is receiving a lot of plays and downloads on iTunes, Amazon, CD Baby, Spotify and all the other major online platforms.
‘The Calling’ is beautifully performed by Liam and includes a poignant spoken piece by Stephen Travers who wrote the song. It was recorded at the Golden Egg Studios in Portlaoise and at the Sands family recording studio in Newry. Anne Sands sings backing vocals and the song is also receiving quite a few airplays in the US and Australia.
‘The Calling’ is the signature song of the Truth and Reconciliation Platform (TaRP), an organisation co-founded by Stephen two years ago to promote reconciliation and lasting peace in Northern Ireland by highlighting the terrible consequences of terrorism on both sides of the political divide through the stories of its victims. 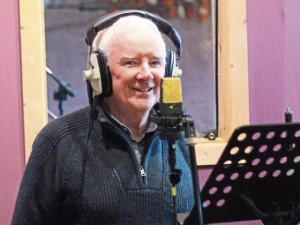 Readers will recall that bass guitarist Stephen was seriously injured in the horrific loyalist attack on the Miami Showband at Banbridge, County Down in 1975. Three of his fellow band members, Fran O’Toole, Tony Geraghty and Brian McCoy, were shot dead and only himself and one other musician, Des McAlea, survived.
The CD was officially launched recently at a reconciliation event at the Parador Hotel on Belfast’s Ormeau Road chaired by former Northern Ireland Deputy First Minister and former SDLP Deputy Leader, Seamus Mallon. The Truth and Reconciliation Platform is promoted by the Department of Foreign Affairs and other supporters include former President, Mary McAleese, and the Irish Ambassador to Washington, Dan Mulhall.
In asking Liam to take the lead vocal on ‘The Calling’, Stephen Travers placed his trust in an old and loyal friend from Carrick-on-Suir as they had played together for many years in groups and bands before and after Stephen joined The Miami. The very best of luck to them both.