Home » Opinion » Foley on File » Life in Your Years

Life in Your Years

Stan Philips (80) reached the finals of the eir Silver Surfer Awards which were held in Dublin last week. Stan is aiming to inspire all older people to reach their full potential and to make the most of life. STAN Philips is an 80-year-old who certainly isn’t living up to any stereotypes. Along with looking great for his age, Stan also has a great attitude and outlook on life. “Being in your seventies is one thing, but when you hit 80 you get a different attitude,” said Stan.
Last week marked 14 years since he had a quadruple bypass and nearly died. 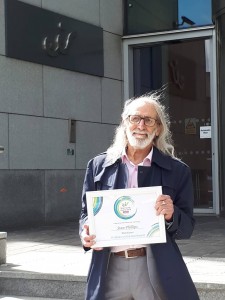 Stan Philips pictured at the eir headquarters in Dublin with his award for being shortlisted in the ‘Hobbies on the Net’ category of the Silver Surfer Awards with Age Action.

He acknowledges that this helped shape his current perspective on life. “I thought ‘I’ve got to grab this life and make one last push’,” he explained. “We’re out of it soon enough. We only get one chance.” Stan, who says he is still actively seeking new opportunities and adventures, believes many people get caught up with immaterial aspects of their lives and with trying to juggle different things. Stan has a passion for communicating with people and currently presents his ‘Thanks for the Memory’ radio show on TCR FM on Mondays from 10am-12pm. It’s described as “an eclectic confection of musical and poetical reflections culled from a long life filled with music and words in all genres”. Along with partner Bernadette, he co-presents ‘The World in View’ on Thursdays from 10am – 12pm.
The show offers up-to-date information about local, national and global affairs, in an insightful format. Stan and Bernadette cover a variety of topics, including local events, books, movie reviews, community development, politics, business, film, writing, art, travel, food and much more.Last year, the station acknowledged them with the ‘Best Speech Based Programme’ accolade for ‘The World in View’ and ‘Best Presenter of the Year’ award for Stan. Through their broadcasts on TCR FM, they hope they can inspire people and expand their listeners’ horizons. “We like to think we’re bringing some inspiration to the station,” said Bernadette.
TCR FM, which is a registered not for profit organisation, run by volunteers and overseen by a Board of Directors who represent the wider community of Tramore, prides itself on offering a fair, independent and objective service, which represents the range of views and interests within the community.
The station strives to promote and support access to, and participation in, broadcasting for individuals and groups within the community.
Bernadette says she thoroughly enjoys interviewing people through her involvement with TCR FM and would like to encourage and inspire more people to take up their passion – whatever that may be. 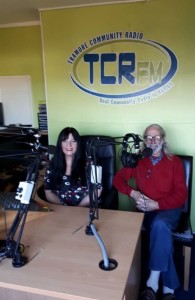 Stan and Bernadette pictured in the TCR FM studios on Queen Street, Tramore.

She is keen to stress that “life doesn’t stop at a particular point”. Bernadette has given talks to many different groups, including Active Retirement groups, and always encourages people to “break the ground” and reflect on the legacy which they will leave.“Life becomes an existence sometimes, but it must never become like that,” she said. Stan has also given many talks to different groups of older people – but admits he is sometimes the oldest person in the room!
On Saturday April 7th, Stan presented a Victorian evening of Songs and Stories at the Parlour Vintage Tearooms on George’s Street in Waterford in an event which was entitled ‘Just A Song at Twilight’.
The evening featured evocative music, stories and jokes of that time, with Stan and Bernadette elaborately dressed in period costume. “We celebrated the Victorian gentlemen and ladies who were so elegant dressed as they went to concerts and garden parties,” said Stan, who admitted that there were some seedy Victorian stories interspersed with the night’s entertainment! Due to its success and the positive feedback, Stan hopes to stage another similar event again in the near future.