It is with great regret that we learned of the proposed closure of the Irish Ferries Rosslare-Cherbourg route.
This ferry route to France goes back to the 1970s when the State owned Irish Continental Lines ran ferries to Le Havre and later to Cherbourg.
It opened up Ireland to more tourism traffic from France, Italy, Belgium, Germany and Holland from the 1970s for motoring and foot passengers and we can recall using it on occasion. 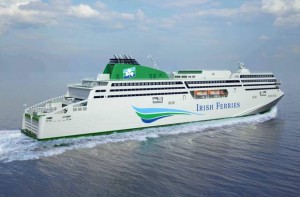 Given our own memories of using the route makes it’s extremely sad to learn that Irish Ferries appear set to cut the service from next year.
Irish Ferries recently had competition from Celtic Link Ferries which was taken over by Stena Line in last two years and this certainly hasn’t helped the Irish Ferries route.
There is also a Brittany Ferries route to Roscoff from Cork, which only runs weekly but is nonetheless a very substantial route.
We listened to the statement delivered by Transport Minister Shane Ross on RTE on Wednesday last in which he appeared to have been convinced that he couldn’t over turn what is a commercial decision by a private operator.
He added that most of the customers would still have the option of going from Dublin to Cherbourg where most of their passengers are, but this will come as cold comfort for ferry users living the South East.He seemed to have given up on the Rosslare route to France and is taking the company line which makes one wonder how hard he’s trying to save the route. While he met with the CEO of Irish Ferries on the matter, there’s no doubt in our mind that Minister Ross should be trying to preserve the Rosslare route with Brexit on the horizon.After all, there will be even EU money to support alternative routes for Ireland to France and Europe for trade in the wake of a hard Brexit.
Irish Rail have also invested heavily in Rosslare Europort so they too are naturally disappointed in the decision which displays a glaring lack of joined-up thinking.
In the Dáil Taoiseach Leo Varadkar is urging Irish Ferries to retain the service, as is local Labour TD Brendan Howlin, and we in Waterford should stand by our neighbouring Wexford TDs on the matter,
Deputy David Cullinane (Sinn Féin) has supported the retention of the service form Rosslare but at the time of writing, we’ve yet to hear wait to hear from our other Waterford TDs on the matter, including Minister of State John Halligan on the matter. The loss of this service will weaken tourism in the region when it comes to receiving car and camper van travellers and will also hurt overseas trade. Given that we’re enduring Brexit worries at present, this (likely) decision is inexplicable .The new WB Yeats Irish Ferries vessel will sail the Dublin route to Cherbourg four times a week with a capacity for 1200 cars and trucks and 1885 passengers. This super ferry’s arrival appears to have shafted the Rosslare ferry terminal. We understand the situation is under review but a strong lobbying presence in the South East is needed in the interest of our region’s tourism and freight interests. The value of the Rosslare route and its retention must be championed.