A decision by a powerful Vatican body to bar former president, Mary McAleese, from speaking at a conference in the Vatican to mark International Women’s Day is almost certainly linked to a bitter internal battle raging within the Church.
Pope Francis, a liberal pontiff who appears to becoming more popular with every passing month, is fighting a massive backlash from powerful figures within the Church like no other pope in modern history.

Basically, Pope Francis favours, among other things, giving free range to the reforming designs of the Second Vatican Council. He considers that the Church should not be a type of monarchy but rather a ‘field hospital’ where mercy and care, especially for the poor, is the cornerstone of pastoral practice.
The Curia is the Vatican civil service and, recently, the Pope made no bones about declaring that within the ranks of the Curia there was ‘an unbalanced and debased mindset of plots and small cliques’. 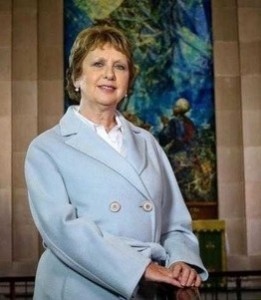 Mary McAleese – barred from addressing a conference in the Vatican to mark International Women’s Day.

This is not an uninformed opinion I’ve picked out of the blue: serious newspapers around the world, including many prestigious religious publications, are talking openly of ‘a civil war in the Vatican’.
Several weeks ago, a Jesuit magazine published an article by its deputy editor, Fr Giancarlo Pani, in which he asked readers to consider whether an all-male priesthood might, perhaps, be outdated. Insiders say the author is only a few steps removed from the Pope and the article would not have been published without the Pontiff’s knowledge and, presumably, his consent.A new book by senior Vatican figure, Cardinal Francesco Coccopalmerio, says the divorced and remarried can receive Communion if they have some wish to change their situation. He also makes some interesting points about intercourse as practiced by divorced and separated Catholics. This is a head-on clash with conservative Catholic teaching yet the Cardinal’s book has appeared with evident support from within the Vatican and without official contradiction.

Many influential figures within the Church were flabbergasted and objected strongly when, last month, Pope Francis married two flight attendants in an impromptu (maybe), mid-air ceremony on a papal flight from Santiago to Iquique in Chile. The couple have two daughters and had been married in a civil ceremony but were unable to go through with their planned religious ceremony because an earthquake damaged their Church in Santiago.

According to reports, some of the key figures opposed to Pope Francis and his reforms are the retired Pope Benedict and the influential Cardinal Gerhard Muller, dismissed by Francis from his powerful post as Prefect of the Congregation for the Doctrine of the Faith. The decision to bar Mary McAleese is said to have been made by Cardinal Kevin Farrell, Prefect of the Dicastery for the Laity, Family and Life.

Many bishops are believed to be supportive of Francis but others are quietly backing the opposition to him and it has been suggested that the plan is to undermine and slow down his reforms as much as possible. He is, after all, an 81-year-old man maintaining a grueling and punishing schedule week in, week out. Time may not be on his side but we shall see what we shall see.Pope Francis is coming to Ireland this year and, whatever about divisions in the Church, he is assured of a very warm welcome.