Mooncoin author on Kilkenny’s role in War of Independence

A new book by Mooncoin born author, Eoin Swithin Walsh, is set to rewrite history about the involvement of ‘military elements’ in Kilkenny during the War of Independence and subsequent Civil War.
Entitled ‘Kilkenny in Times of Revolution 1900-1923’, Eoin’s book is described by Professor Diarmaid Ferriter of UCD as ‘well written, of considerable depth and a valuable and original county study’.
On many occasions, the late writer and early TD, Ernie O’Malley, maintained that military elements in Kilkenny were ‘slack’ during the conflict. In his book, Eoin Walsh, shows that O’Malley, who fought during the War of Independence and was a commander of the anti-Treaty side during the Civil War, was mistaken in his belief. 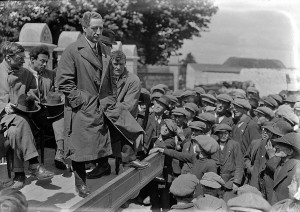 This rare photograph shows Cathal Brugha, who was elected as a TD for the Waterford Constituency in 1918, speaking at a rally in Mooncoin on June 12th, 1922. Eamon de Valera is seated behind him. Brugha was killed three weeks later in a Civil War clash with Free State forces. Photograph courtesy National Library of Ireland.

In terms of explicit violence, gunfire, destruction and death toll, the upheaval in Kilkenny was relatively low-intensity, says the author, but goes on to show that Kilkenny was indeed at the forefront of the struggle for Irish freedom. Kilkenny was often overlooked in accounts of that period but with the use of previously unseen archive material Eoin Walsh corrects history.
The list of Kilkenny fatalities during the War of Independence is examined and, for the first time, combatants and civilians who died during the Truce and Civil War are recorded. Eoin Walsh shows that, in Kilkenny, an even more deadly conflict occurred that previously believed.Eoin currently works in the civil service in a governmental role and has a Master’s Degree in Modern Irish History. In the past, he has contributed to the ‘1916 Rebellion’ and ‘Michael Collins’ walking tours in Dublin.