No mistaking that famous Doonican smile

Visitors to the Whitford House Hotel in Wexford a couple of weeks ago could be excused for glancing a second time in the direction of this happy pair enjoying a very special double-birthday celebration. John Doonican and his sister, Teresa Finnegan, are originally from Roanmore Park in Waterford and were celebrating their respective 82nd and 70th birthdays with their families. 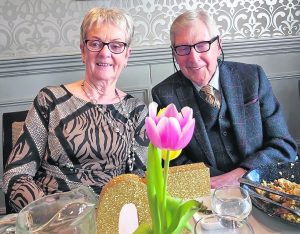 There’s no denying that famous Doonican smile and it wouldn’t be the first time that John was mistaken for his famous Uncle Val. John and Teresa’s father was Ned Doonican, Val’s oldest brother. Their aunt, Una Jackman, is the only surviving member of that generation of family and, according to John, she is ‘still going strong’.

Before John emigrated to England in the early 1960s, he was a founder member of the Savoy Showband with his neighbours, Tony and Michael Cleere, and John Barron and Paddy Hennessy. He and his wife, Nuala, now reside in Haywards Heath in Mid Sussex, a town about the size of Waterford and within easy commute to London where John used to work for CIE Tours International.

John tells me that he follows the Cath Lab 24/7 campaign in Waterford with great interest. He suffers from angina and has had several emergency visits to the Royal Sussex County Hospital in Brighton where he was successfully treated each time.

The Royal Sussex is the main cardiac centre for his area and John says their expertise, because of the economies of scale, is second to none. They have five theatres open during weekday working hours and one theatre at night and at weekends. The hospital has 15 cardiologists, including Dr Sean O’Nunain from Ireland, 5 cardiac surgeons and 7 cardiac anaesthetists. John sends best wishes and good health to all his friends and family in Waterford and, no doubt, they all send him and Nuala many happy returns.