We were glad to see that the North Wharf is still getting state aid and substantial investment for infrastructure of 12 million plus as we wait to see a Government formed.
There had been worries expressed elsewhere and by Waterford Fine Gael Candidate Cllr. John Cummins that there was no certainty that other political parties may not implement the planned investment. Given this new investment it will be harder for any new Government to turn the clock back and stop this investment as some worry.
Falcon Real Estate also seem happy with this turn of events and stated so last week.
The whole project may not be complete in the life time of the coming Government so local pressure has to be maintained.We hope that the new TDs will follow the likes of former TD John Halligan and outgoing Minister of State and support the project, which is the signal of the Waterford revival.A united front is needed on this and many other issues like the university, the hospital and getting more state-owned social housing in Waterford. 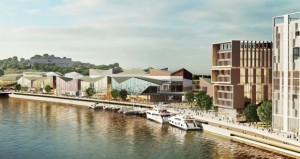 An image of the proposed development on the North Quays.

As we await for a new Government to be formed in what could be a hybrid of political parties with a minimum of three needed and two of the larger ones for a reasonable majority, we will probably see that some of the issues in the election will find common ground among them.
Solutions may differ but the issues are still there.But who has the best ideas and who will be most effective? They will all find that the speed of public administration , whether it be health, planning and housing as well as education are slow.
Maybe there needs to be more reform to speed up decision making. We all know how long and tortuous the process for the North Quays is taking and as a result some wonder will it ever happen or some world event or economic slow down might happen in the meantime.
This has been a concern among some opinion makers.In the meantime, having a caretaker Government is not ideal. Belgium has suffered from that in the past. A Grand Coalition as happens in Germany is being spoken about, but the parties formally are avoiding it for fear of alienating the membership. Facts and numbers suggest it is heading that way, in the meantime the ship of state has to keep floating along.
We need to talk things up a little more and get away from the negative agenda that seemed to dominate the election discourse. Interesting times are ahead. Storm clouds are there with Brexit, the move against foreign workers in the UK suggests that businesses there will suffer from labour shortages and this will hit jobs and demand.