Home » Opinion » Foley on File » On a Mission to Misiones

On a Mission to Misiones

Local volunteers recently returned from the province of Misiones in Argentina where they continued the legacy of Fr Liam Hayes at the St Teresa Home in Oberá (header across top of right page)
Liam Hayes, a Divine Word Missionary and native of Cappamore, County Limerick started his adult life as a secondary school teacher.However, having felt the call to the priesthood, he was ordained at age 36.He was dispatched on Mission to the town of Oberá in Misiones, Argentina where he spent his entire priestly life until his untimely passing in December 2014.Misiones is one of the smallest provinces of Argentina and is about the same size as Ireland.
It is also the most northerly Argentinian province and borders Brazil and Paraguay.Fr Liam dedicated his life to helping the poor, disabled, aged and unwanted of Oberá and over time set up three separate homes to cater for these people known as the Homes of Liam Hayes.Des Kelly from Tramore, well known in Waterford through his volunteerism with Waterford Hospice for many years, first became aware of the work of Fr Liam in 2000. 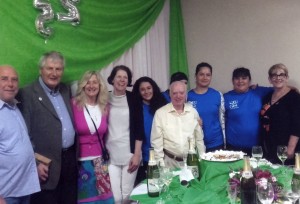 Members of the Irish group pictured with locals at the 25th anniversary celebrations.

He had met him in Dublin and offered to go to Argentina and engage in voluntary work when he retired.“He invited me to come and see what they were doing but suggested that I get involved in fundraising here at home and that’s what I did,” explained Des.A charity, the St Teresa Oberá Support Fund, was established in Ireland some years back to help the Homes and Des is still actively involved with his group.He first visited Argentina in 2005 and spent three weeks in Oberá where he was very impressed with the work taking place.
He returned again in 2007 and his latest visit was in May 2018.During this third trip with fellow volunteers, he was delighted to see that the incredible legacy left by Fr Liam is being continued.The group, which travelled at their own expense, was comprised of Fr Liam’s sister Marian Hayes Ryan from Cork, Bernadette Deegan from Kilmacow, Elaine Partridge from Tramore, and Des and his  daughter Liz.The first three nights were spent in Buenos Aires  – a city which certainly made an impact on the visitors.
“It’s a most magnificent city with wide boulevards and classical architecture on a par with the finest in Europe,” said Des.“Having enjoyed some excellent steaks, toured the city and experienced an evening of Tango we transferred to Iguazu to soak up the magnificence of the greatest waterfalls in the world which are breath taking in their majesty.”The three countries of Argentina, Brazil and Paraguay meet at Iguazu and the waterfalls are said to be one of the wonders of the natural world and are widely regarded as a must see for anyone visiting South America.
The group then moved on to Oberá and to the Homes which Des described as a “dose of reality”.“We saw at first hand young and old with the most profound disabilities imaginable both physical and mental,” he said.“Having got over the initial shock we soon found that far from being a place of sadness and despair the Homes were filled with joy and happiness.”Des was glad to see that huge advances have been made since his first trip which proved very encouraging.
“Even though they lacked what would be regarded as basic equipment, this was more than made up for by the sheer love and care of the staff who are dedicated to enriching the lives of those less fortunate than themselves,” he said.“We soon relaxed and began to soak up what can only be described as the joyous atmosphere in the Homes.”The Order took over the running of the Homes following Fr Liam’s death and the day to day management of the Homes is now under the guidance of Bro. Hugo Castro S V D.
“Despite the lack of resources he has continued to improve the lot of the residents and, at all times, include them in all events and activities at the Homes,” explained Des.He outlined some of the many individual stories of the residents – many of whom are triumphing against all odds.“For example, Tamara, who is in her early twenties, is totally incapacitated but has a smile that would simply melt your heart,” explained Des.
“Then there is three year old Sheila who was born to a teenage mother and had club feet. After operations and good care she is now running around like any three year old and can manoeuvre her way around any smart phone. They are working towards reuniting her with her family.”Des says there are many other inspirational stories.“The one great feature is that the residents are so happy and a marvellous sense of fun prevails,” he said.The typical day of the volunteers was split into three sections during their recent visit.The 31 residents at the St Teresa Home were all severely handicapped, with only three or four able to feed themselves.The volunteers began their day by assisting with breakfast duties at half six every morning until around 9am.After a lull of a few hours, they began assisting with lunch duties in the afternoon after which many of the residents then had a siesta.
At 5pm, residents were prepared for dinner and, shortly afterwards work began on the process of getting everyone ready for bed.The visit of the group from Ireland coincided with the celebration of the 25th anniversary since Fr Liam opened the first Home.A number of events were held to mark this special occasion.The celebrations received widespread media coverage and Des participated in local and regional radio and regional television interviews to speak about the Homes and the efforts of the volunteers.
“The fact that we had come all the way from Ireland to support the Homes was a source of great interest,” said Des. “You could say we were minor celebrities for a few days.”