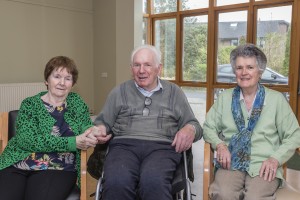 Parkinson’s is classified as a Movement Disorder, as it primarily affects movement, and is variable in its progression.
Some people progress more slowly than others and the symptoms can be effectively controlled with medication for many years.
Fortunately, there are many activities which can be undertaken which can significantly help people who are living with Parkinson’s.
Here in Waterford, a group of around 10-12 people with Parkinson’s meet on a regular basis at Waterford Cheshire, John’s Hill and engage in activities which are designed to help themselves.
“Sometimes we could have 15-20 depending on what’s going on,” explained Bernadette Myler Driscoll who is Chairperson of the Parkinson’s Association Waterford Branch.
Activities include chair yoga with Saffron Murray who is a qualified yoga instructor affiliated with Yoga Alliance Professional.
She has practiced yoga for over 15 years and says it is an integral part of her everyday life as a working mother.
She is delighted to be part of the Parkinson’s Association Team in Waterford and to help spread the message about the many benefits of yoga.
Bernadette is also passionate about highlighting the benefits of yoga for people with Parkinson’s.
While there may be a perception among some people that yoga consists of challenging positons which may be beyond their capabilities, Bernadette explained that yoga is a life tool which can be adapted to suit all abilities.
In her class, Saffron teaches strong exercises but with a gentle approach.
“The whole philosophy behind yoga and its benefits is to strengthen the mind and body,” explained Bernadette.
She highlighted the need for Parkinson’s sufferers to train themselves and to possess a mentality where they take control rather than feeling they are a victim.
“Yes, Parkinson’s is degenerative, but you can slow down the processes. You can do things to help yourself,” said Bernadette.
After yoga, the group’s members tend to have a break, some refreshments and a chat. 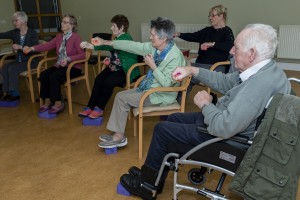 Participating in exercises during a gathering of the Parkinson’s Association Waterford Branch at Waterford Cheshire.

Next up, it’s Breath Control, Relaxation and Meditation with Martina Harte who is also a qualified yoga instructor.
She has many years of experience in this field and is also delighted to be part of the Parkinson’s Association Team in Waterford.
Martina is keen to emphasise the importance of a strong mental approach to how you feel physically.
In total, the group’s activities each Monday last for around two and a half hours.
This allows participants to get plenty of exercise and relaxation in a comfortable setting.
Bernadette would also like to invite a physiotherapist to speak to the group, as well as a nutritionist and other motivational speakers.
A five week Smovey course is planned for the near future which will take the class duration each Monday to around three hours.
Smovey is a dynamic fitness product which is proving to have many benefits for people with Parkinson’s.
Using Smovey rings provides a dynamic upper body workout that gets you fit while helping to burn more calories and stabilise your back and spine.
Bernadette says she is keen to encourage anything which can contribute to people’s wellness and would like to explore activities involving dance as the benefits of music and dancing for people with Parkinson’s have been well documented.
She says it’s important to provide people with the necessary tools to ensure they can adapt various activities at home to benefit their own health and incorporate different techniques into their daily lives.
“And it’s not costing them money or huge amounts of time,” she said.
She would like to see more people with Parkinson’s get involved and says taking the first step of coming into the club is the hardest.
Bernadette would particularly like to see more men becoming involved but acknowledges that some men may think that yoga and such activities are not for them.
However, she says they can be assured of a warm welcome and will greatly benefit from their involvement.