To mark the 90th anniversary of the disappearance of postman Larry Griffin, a commemorative plaque was unveiled at the old post office in Kilmacthomas on December 27th.
Christmas 2019 marked 90 years since the disappearance of Kilmacthomas postman Larry Griffin. On Christmas Day 1929, Larry, who had served as a solider in the British army including during World War I, left Kilmacthomas on his bicycle to embark on his deliveries to Stradbally and the surrounding areas.He never returned home and was last seen in Stradbally village that night. His bike was found the next day near the Five Cross Roads and appeared to have been carefully positioned. 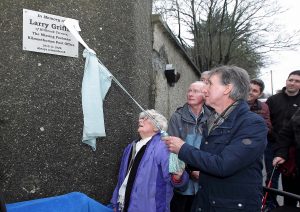 Subsequently, 10 people were charged with his murder including two Gardaí, a teacher and a publican. All 10 were acquitted when the chief witness withdrew his evidence. Nobody else was ever charged in relation to his disappearance.The cased proved to be a huge test for the fledgling An Garda Síochána which had only been established in 1922.
At the time, the case transfixed the nation and even generated international headlines.
Theory after theory has abounded in relation to Larry Griffin’s disappearance and the case has been the subject of TV and radio documentaries. A renewed search for his remains took place as recently as 2012 when underground surveying techniques were used.But behind all the intrigue is a tragic human story as Larry Griffin was denied a Christian burial and his wife Mary and three children were left without their beloved husband and father.
Special event
Ninety years after his disappearance, a large attendance gathered at Our Lady of Mercy Church, Kilmacthomas on Friday December 27th for Larry’s anniversary Mass. Fr Martin Keogh, PP, Kilmacthomas, and Fr Jerry Condon, PP, Stradbally officiated at the Mass assisted by Deacon Brendan Gallagher.Fr Keogh spoke of the impact which Larry Griffin’s disappearance had on the local community and the ripple effect which it had created for future generations.
As the disappearance occurred at Christmas, Fr Keogh said this further enhanced the difficulties for Larry’s family in coming to terms with their situation. Fachtna Ó Drisceoil, author of the book ‘The Missing Postman – What Really Happened to Larry Griffin?’ which was released in 2011, was also in attendance and addressed the congregation following Mass.
Fachtna had developed a keen interest in the story of Larry Griffin and subsequently embarked on painstaking research to compile a hugely impressive book which minutely documents the case. 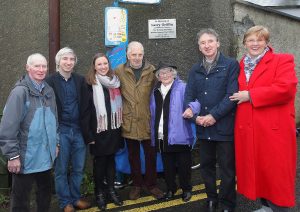 He outlined the gravity of what had occurred on Christmas Day 1929 and said the Griffin family were denied the chance to properly mourn Larry.
Fachtna pointed out that the role of the postman was an intrinsic fabric of Irish society. At the time, he said the postman incorporated Facebook, WhatsApp, Instagram etc. and was a vital source of communication to the outside world.
He said many subjects which were previously viewed as being taboo topics, including the case of The Missing Postman, are now being openly discussed which is an example of the positive changes which have taken place in Irish society. He said the fact that the case is now discussed so openly is an example of a changing Ireland.
The commemoration was instigated by An Post who had suggested the idea to the Griffin family.In attendance was Noel Cocoman of An Post Employees Credit Union who outlined why An Post was keen to mark the anniversary of Larry Griffin’s disappearance. Permission was given by Rosemary Brown, daughter of the former postmaster at Kilmacthomas the late George Brown, to erect a plaque at the side of the old post office which now offers accommodation to visitors to the village.
Larry Griffin’s grandson Seamus Mulrennan also spoke and issued a renewed appeal for anyone with any information on his grandfather’s disappearance to come forward. Well-known local author and poet Tom Power from Kill (a former postman) read a poem which he had specially produced to mark the occasion. Entitled ‘In Memory’, the poem tells the story surrounding the disappearance and encapsulates many different elements associated with the case.A framed copy of this poem was presented by Tom to Larry’s daughter-in-law Bridie Griffin.
Aged 99, Bridie was praised by Fachtna Ó Drisceoil as were all of the “strong Griffin women”. Bridie’s daughter Breda thanked all who had helped in organising the special event and expressed gratitude for all of the support which has been shown to the family. The congregation then made their way to the old Kilmacthomas post office on Main Street where a large number of people had already gathered for the official unveiling of the plaque. A blessing was performed by Fr Keogh and refreshments were served afterwards at Kiersey’s Bar.
Always remembered
After Christmas 1929, Kilmacthomas and Stradbally were catapulted into the national spotlight because of the disappearance of Larry Griffin.
In an era in which there was no social media or even television, the level of interest which existed in the case is hard to now comprehend.
At the time, it was widely reported that buses travelled from Waterford and further afield to observe the many searches for Larry Griffin which were undertaken around the Copper Coast area.
Now, Kilmacthomas is making the headlines once again thanks to the phenomenal success of the Waterford Greenway as crowds flock to enjoy the area’s beauty. Thanks to the erection of this new plaque in a prominent location, visitors to the picturesque village can now learn of an important part of the area’s past while also sharing in its bright new future.