Remembering the past and promoting a bright future 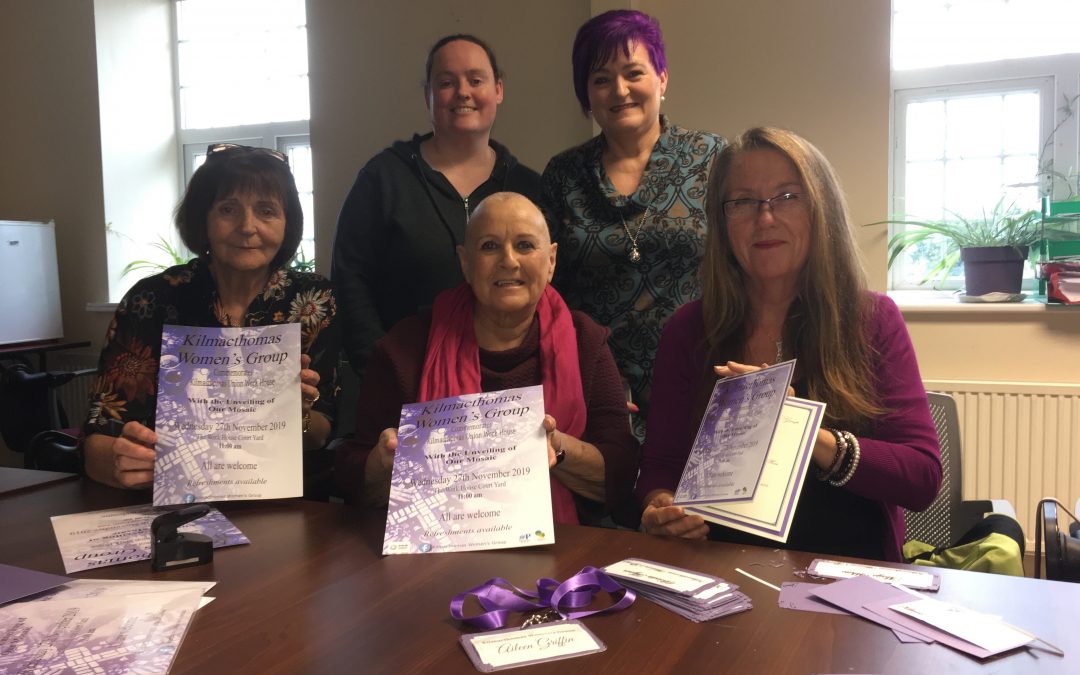 The talented and enthusiastic members of Kilmacthomas Women’s Group are commemorating 100 years since the closure of the Kilmacthomas Union Workhouse
Members of Kilmacthomas Women’s Group are busily preparing for a special event aimed at commemorating an important piece of County Waterford’s history. The group was established in September 2017 with support from the Community Education programme of Waterford Wexford Education Training Board (WWETB).
Now, a group of energetic and enthusiastic ladies meet weekly on Wednesday mornings throughout the school calendar year in the Kilmacthomas Workhouse.Tutor Karen Power, well-known through her successful ‘Butterfly Barn’ series of books, explained that she was delighted to get involved with establishing a new women’s group in Mid-County Waterford. 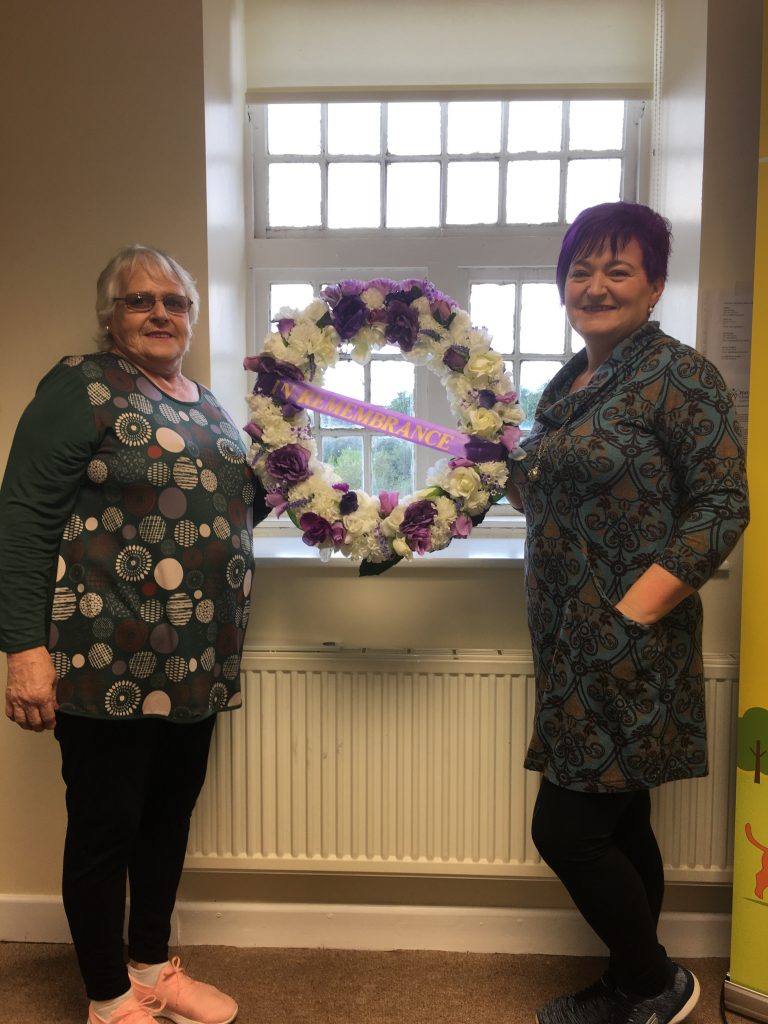 She says the group has gone from strength to strength and she was heartened to see such immediate interest.
The ladies involved with the group now affectionately refer to their weekly get-together as ‘Wacky Wednesday’ as they never know what direction their gathering might take! They have participated in an eclectic mixture of activities, including arts and crafts, yoga, acupuncture, Zumba, cookery, flower arranging, jewellery making and quilling. They have enjoyed outings to various locations, including afternoon tea at Woodhouse Estate in Stradbally; cycling on the Waterford Greenway; mindfulness in Crough Wood; a walking tour of Waterford City; and trips to the Lafcadio Hearn Japanese Gardens in Tramore and Curraghmore in Portlaw.
As if that’s not enough, they have welcomed a number of guest speakers to speak on various topics of interest.
They also interact with other women’s groups in the surrounding area.Karen says there is something on offer for all interests and she is keen to ensure the get-togethers are not tied to any set format. The ladies themselves say they enjoy the great sense of camaraderie which exists among them – with many interacting with others from throughout the locality who they may not have previously known.
Now, they are coming together in a group which consists of like-minded people who are keen to share interests and learn new skills.
History
On one occasion, well-known local historian Sean Murphy spoke to the group about the history of the Workhouse in which the group meets. Kilmacthomas was one of the new Poor Law Unions created in Ireland between 1848 and 1850, with the Kilmacthomas Workhouse built in 1851. The Workhouse was an institution for families that could no longer support themselves. They would come to the Workhouse to work in return for food. Some of the occupations the inmates had included weaving, milling, baking, tailoring, shoemaking and other miscellaneous jobs.
Records show that on December 19th 1846 there were 650 inmates – a figure which had risen to 739 by January 1st.A fever hospital was located on the grounds as well as a mortuary. The Union had its own graveyard where many were buried in unmarked graves. This history starkly contrasts with the positive atmosphere which now exists in and around the building. The area is now home to such diverse businesses as Coach House Coffee, Breakwater Gift Shop, Waterford Greenway Bike Hire, Mayfield Birds of Prey, along with agencies including the WWETB and Waterford Childcare Committee – and of course the Kilmacthomas Women’s Group.Since the official opening of the Waterford Greenway in March 2017, the Workhouse area has become an important focal point where locals gather to socialise and tourists embark on or complete their Greenway adventures.
Commemoration
When the Kilmacthomas Women’s Group discovered that the Workhouse had closed in November 1919, they decided it would be fitting to mark the centenary of the closure this November. They were concerned that there was nothing to inform visitors about the location and its bleak past. Many visitors are also unaware of the presence of the Famine Graveyard. With this in mind, the ladies brainstormed about what they could do to appropriately commemorate the 100th anniversary. Different ideas were spoken about and everyone added in their own input before they settled on the idea of creating a mosaic.
Originally, the mosaic was intended to focus on the village of Kilmacthomas in general, however, given their strong connection to the Workhouse, the ladies decided to make this the focal point instead. As initial sketches were drawn up, they also decided that the mosaic would reflect the darkness of the Workhouse’s past while also depicting the brightness of its future. It was initially intended that the mosaic would go on display in the lobby of the WWETB building within the Workhouse.However, the group felt this would limit the numbers of people who would potentially see it. Instead, they were kindly offered a gable end wall opposite Coach House Coffee.
This meant they needed a mosaic that could survive Ireland’s inclement weather and so they set about seeking some professional guidance.
Collaboration
The ladies contacted Waterford Area Partnership who were delighted to collaborate through their Social Inclusion & Activation Programme and, with the help of artist Miranda Corcoran from The Art Hand, Bonmahon, the Kilmacthomas Women’s Group set about designing a mosaic using slate and stone found around the grounds. Adding a personal touch, they have also inserted some mementos of their own including pieces of jewellery. This enhances their aim of incorporating bright colours in order to symbolise the positive future which now lies ahead for the Workhouse area. 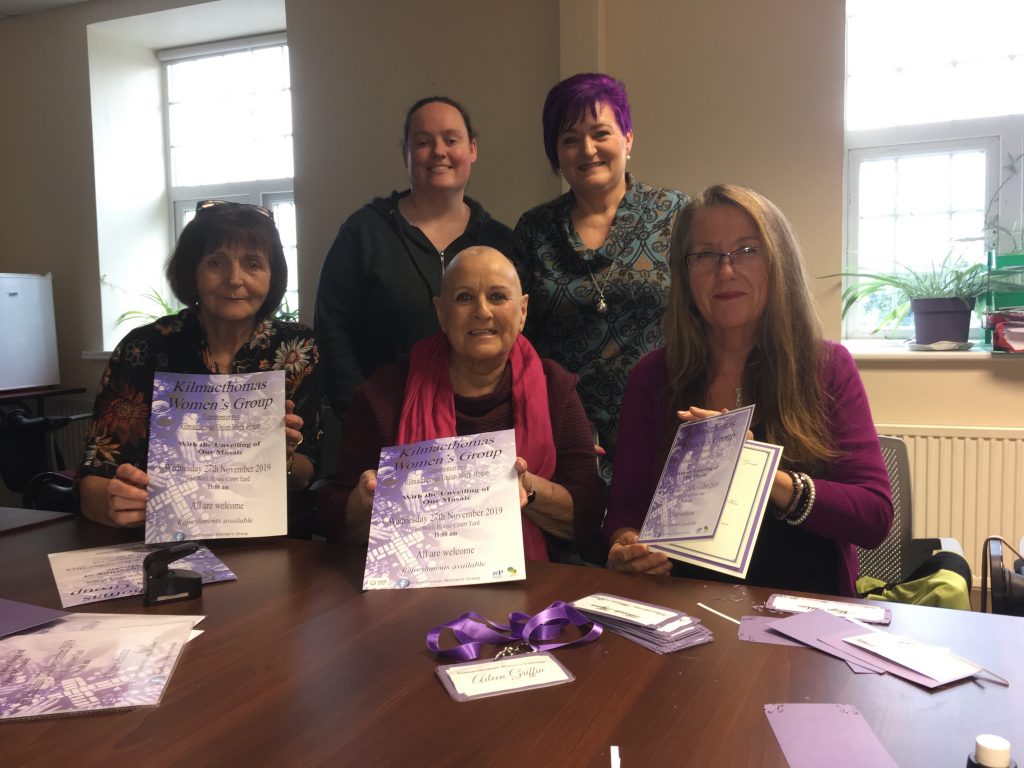 Colorful invitations have been created by the group in advance of the commemoration event on Wednesday November 27th. Back: Helena Coleman and Margaret White. Front: Anne Fitzgerald, Yvonne Murtagh and Aileen Griffin.

With the creative juices continuing to flow, one member of the group suggested making a matron’s outfit and a copy of what the children would have worn in the Workhouse.And so, a dress-making group was formed. It’s planned that the clothing items which have been created will be on permanent display.Ideas kept flowing, with another member suggesting the group create a wreath as a poignant memorial to be placed at the Cross of the Famine Graveyard. They settled on the colour purple as a theme to run through the project to represent imagination and spirituality – and so the talented women have fashioned a beautiful wreath made with purple and white silk flowers.
Karen Power explained that nothing could stop the flow of creativity and enthusiasm as invitations, posters and name tags were made by the group using calligraphy.
Special occasion
The finished mosaic will be unveiled at a special event on Wednesday November 27th at 11am in the Workhouse Courtyard and all members of the public are invited to attend. The trad band from St. Declan’s Community College will be in attendance along with Transition Year students. Fifth and sixth class pupils from Kilmacthomas and Newtown Primary Schools will also attend. A whole host of invited guests will be in attendance, and some of the members of the Kilmacthomas Women’s Group will speak on the day.
The work involved in bringing this project to fruition has been captured on film in the hope that it will be played on a loop in an interactive room at the Workhouse for tourists to view. “We feel it’s important to both acknowledge the past and also to share all of the positive things that are happening now at the Kilmacthomas Union Workhouse,” says Karen Power. Certainly, all involved with the Kilmacthomas Women’s Group should be commended for their admirable efforts in striving to remember the past while also looking ahead to a bright future.Their impressive project perfectly highlights what can be achieved when people come together to share their talents and showcase their pride of place.
The commemoration event takes place in the Kilmacthomas Workhouse Courtyard on Wednesday November 27th at 11am.