Home » Opinion » Foley on File » Responding Within the Community

Responding Within the Community

A new automated external defibrillator (AED) has been installed by the Kilmacthomas Cardiac First Responder (CFR) Scheme on the village’s Main Street.
CARDIAC First Responder (CFR) schemes perform a hugely important role in communities throughout Ireland, fighting sudden cardiac death and cardiovascular disease.
The importance of CFR volunteers is clearly evident when you consider that 10,000 people die in Ireland each year from cardiovascular diseases.Volunteers are trained to deal with a variety of issues including cardiac arrest, chest pain, sudden collapse, stroke, choking etc.Here in Waterford there are a number of groups which are providing this much needed service including the very successful Kilmacthomas Cardiac First Responder Scheme which is going from strength to strength.The launch of the village’s latest automated external defibrillator (AED) took place on Friday evening 5th October outside D. Kirwan/Mulhearne (Danny’s) grocery store on the Main Street.Kilmacthomas is now a popular tourist destination thanks to the opening of the wonderful Waterford Greenway.
Attractive signage erected at entrances to the village proudly proclaims that Kilmacthomas is at the “heart of the Greenway” and it’s this convenient geographical location which makes it such a popular gateway to exploring the amenity. As a result of this popularity, the population of the area swells significantly at certain times – particularly at weekends and during the summer months.
As users of the Greenway are engaging in cardiovascular activity, including many who may not be used to regularly exercising, the likelihood of some sort of medical incident occurring increases significantly. 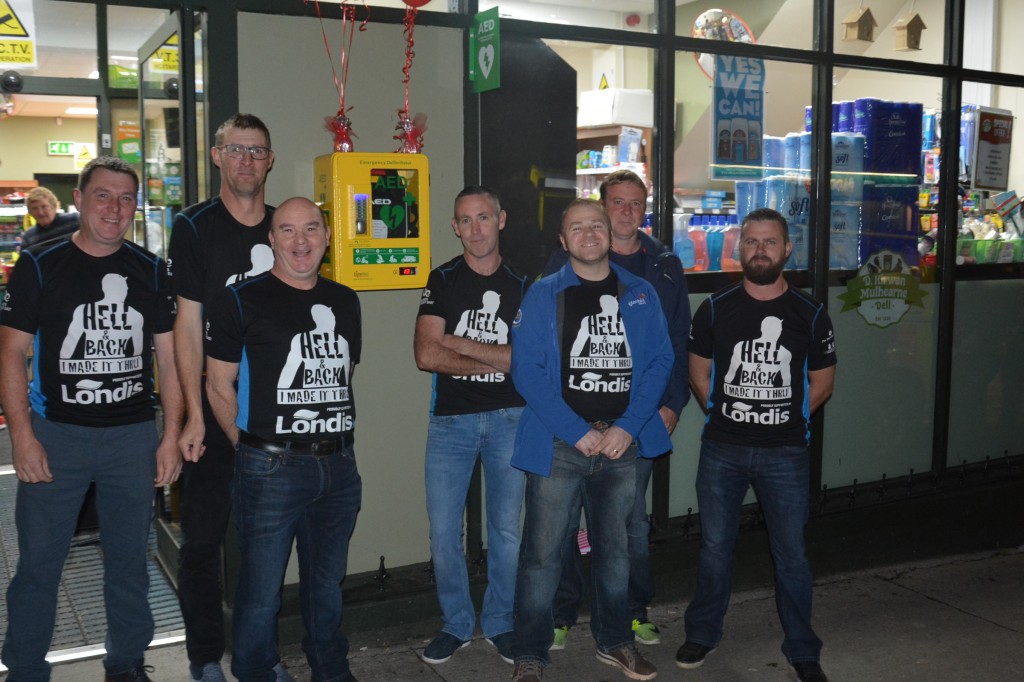 Group which participated in ‘Hell and Back’ in aid of Kilmacthomas CFR Scheme pictured beside the new AED.

The lack of 24/7 cardiac cover at University Hospital Waterford (UHW), and the effect this is having on the region, further highlights the important role played by first responders.
Having such skilled responders within the local community provides peace of mind for people who are understandably concerned about this unjustifiable lack of cardiac cover.
For all residents and visitors to the area, it’s reassuring to know that there are skilled first responders within the community who are able and willing to respond to medical emergencies.
The Kilmacthomas CFR group was initially formed following a sudden death in the village almost seven years ago. In the wake of this tragedy, Brian Jackman and James Power, who had both responded at the scene, decided that the village needed a structured CFR presence.“We sat down and identified people in the village with experience and relevant knowledge and we approached these people and established a steering group,” explained Brian who works as a Paramedic with the National Ambulance Service.“Once we explained to people what we were doing we had no difficulty in getting people on board.”
A public meeting was held at St Declan’s Community College in the village and the response was very favourable. “From that meeting, around eight people expressed a willingness to become volunteers and responders. We trained them and they made the commitment with us,” said Brian.The original committee was comprised of Brian and James along with Nicky Butler, Siobhan McCormack, Dr David Janes and Gary Corcoran.The Kiersey and Joy families contributed enough funds so that an AED could be purchased –something which was greatly appreciated by all involved with the group.“Word began to spread on the grapevine that if somebody had a problem they could ring us,” explained Brian.
Subsequently, other defibrillators have been purchased thanks to the assistance of Jenny Kirwan of Kirwan’s Pharmacy, the Newtown Field Day and Fundraising Committee and through the ongoing funds being donated to the group. In September 2015, the Kilmacthomas group officially became part of the wider CFR structure.
There are now hundreds of similar groups throughout the country which are under the CFR umbrella which means the groups have one voice when seeking funding, support, training etc.
Each group can be activated by the ambulance service when required.
The Kilmacthomas CFR group has been alerted many times since becoming part of the system.Currently, there are 20 responders (including the committee) and all undergo relevant training once every four weeks.Since 2016, an AED, which was sponsored by Pat Phelan, has been located outside Phelan’s Centra in the village.Many staff members have been trained in the usage of this AED. Meanwhile, in nearby Newtown, there is another CFR group which received a donation thanks to the assistance of CRY (Cardiac Risk in the Young) and the ongoing efforts of the Newtown Field Day and Fundraising Committee.This AED is now located outside the local national school. “The great thing about a public access defibrillator is that anyone who knows what they’re doing can access it. But even anyone who doesn’t know how to use it can access it and it tells you what to do step by step,” explained Brian Jackman.Now, another AED has been installed in a prominent location at Danny’s on the Main Street. 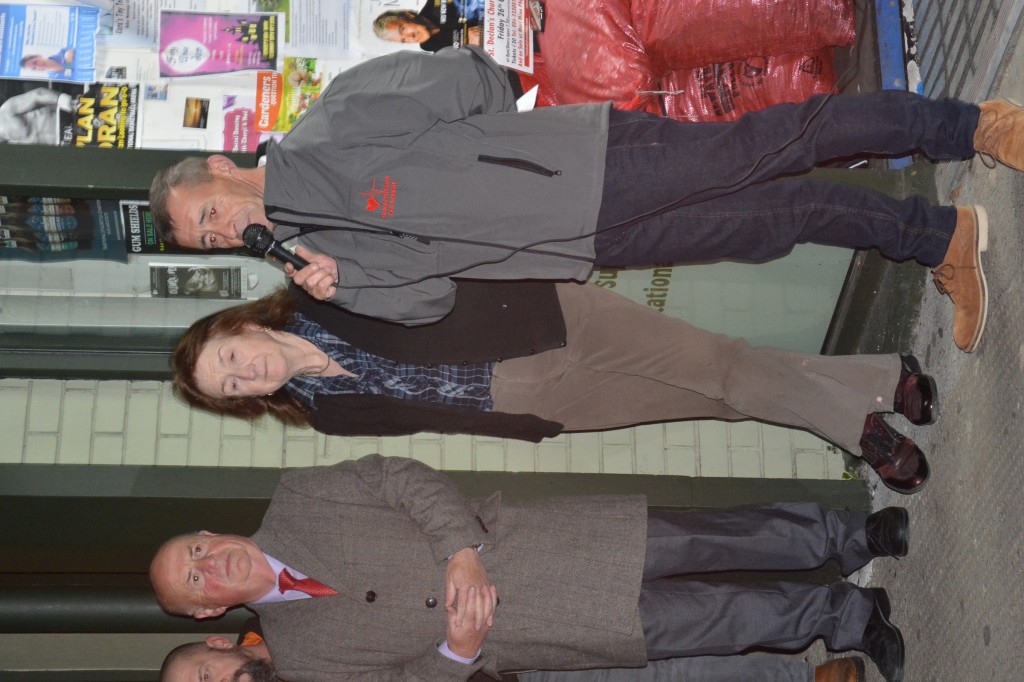 Nicky Butler of Kilmacthomas CFR speaking at the unveiling of the new AED outside D.Kirwan/Mulhearne (Danny’s) on the village’s Main Street. Also pictured are Ger Barron and Dolores Mulhearne.

This AED was unveiled at a special event recently which was attended by the Kilmacthomas CFR group, Bonmahon Coastguard, members of An Garda Síochána and the local public.
In his speech, Nicky Butler thanked all those who have supported the group. He paid tribute to all those who have fundraised for Kilmacthomas CFR including the group of hardy souls who participated in ‘Hell and Back’ in County Wicklow in June which helped make the purchase of the latest AED possible. The participants collected sponsorship for Kilmacthomas CFR and a music session and raffle were held in Kiersey’s Bar in the village on their return that evening. Any fundraisers staged by the Kilmacthomas CFR group have always been well supported and many different businesses have offered to help with their activities in different ways. “The community knows we are here and what we do and that’s evident from the amount of support we receive,” said Brian.
All involved with the group are grateful to all those who have supported them, including members of the public, local businesses, the Civil Defence etc.
At the recent event to launch the latest AED, members of Kilmacthomas Social Enterprise presented €300 to the Kilmacthomas CFR group which was gratefully accepted by Nicky Butler.
The group has so far responded to 17 call outs in 2018 and there is ongoing co-operation with other CFR groups in County Waterford.
Both the Kilmacthomas and Newtown groups work together and also co-operate with other local CFR groups in the area such as Kill, Bonmahon and Portlaw. Each group covers a 5km radius which ensures that a vast area of Mid County Waterford is served by this admirable volunteer service. “For an ambulance to come from Dungarvan or Waterford to Kilmacthomas it could take 15 or 20 minutes. That’s critical time in which a person will either survive or not,” explained Brian Jackman. “Our role is to provide immediate care as fast as we can and to link in with the ambulance service. The ambulance service knows that we are part of the chain so when we arrive on the scene we get as much information as we can and we then hand over when the ambulance crew arrive.”
Members of Kilmacthomas CFR continue to engage in regular training, both indoor and outdoor. They recently created different scenarios along the Greenway in order to give volunteers an idea of the different situations which may arise. There are plans to hold another round of training for members of the public interested in becoming a first responder so get in touch with the group if this is something which interests you.
Additionally, there are plans to locate another AED at Coach House Coffee at the Union Workhouse and it’s hoped that staff members will also be trained in its usage.
This will mean that a huge section of Kilmacthomas will be covered by the presence of AED units. Volunteerism provides the backbone for all successful communities and being a volunteer first responder is perhaps one of the most commendable volunteer roles of all. The fact that Kilmacthomas has such a strong CFR group highlights the huge vibrancy and pride of place which exists within this community. These volunteers may be thrust into a situation at any time in which they will be dealing with a matter of life or death and, thanks to their dedication and civic mindedness, they are truly making a difference to their local community.