What do you think would happen if Waterford City & County Council decided to erect a statue of Satan in the city centre? Not only that, the statue would depict a kindly old man taking a mobile phone selfie of himself!
Well, that is exactly what the inhabitants of Segovia, a city in mainland Spain with a population of over half a million, are facing at present.Apparently, the statue is inspired by a local folktale that says the city’s Roman-era aqueduct was built by the devil in exchange for a young girl’s soul. The two-tiered aqueduct was built around the year 50 and spans half a mile. It is listed along with the old town centre as a UNESCO World Heritage Site. According to legend, the girl eventually succeeded in getting her soul back. 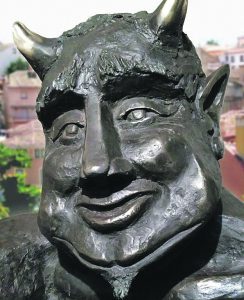 A statue of Satan showing him as a kindly old man has outraged citizens of the Spanish city of Segovia.

The Satanic sculpture was commissioned by the city council in the hopes of attracting tourists but, already, over 6,000 local people have signed a petition asking for its removal. They say that, if a statue of the devil must be erected, at least it should show Satan as repulsive and despicable, not kind and seductive.
The sculpture’s installation has now been postponed while a judge reviews the merits of both sides of the argument.