Home » Opinion » Foley on File » Striding Ahead in the Anne Valley

Striding Ahead in the Anne Valley

VISITORS and locals alike are taking note of the many wonderful walking routes which we are fortunate to possess here in beautiful County Waterford. With many of us looking to improve or maintain fitness regimes for the New Year, now is the perfect time to familiarise ourselves with the assets on our doorstep. Dunhill’s Anne Valley Walk has proven to be an immense hit since it was officially opened in 2013 – and it’s easy to see why.The walkway, which now stretches from Dunhill to Annestown, is a haven of peace and tranquillity.
In November, the hardworking visionaries responsible for this project were recognised at the Waterford Public Participation Network (PPN) Community & Voluntary Awards, scooping the Mayor’s Award. As a result of this achievement, they will now go on to represent Waterford at the All-Ireland IBP Pride of Place Awards later this year. Committee member Mary Finn says the recognition has given everyone involved with the Anne Valley Walk project a huge lift.
“I couldn’t believe it. It’s a great honour and the community really deserves it. A huge effort was put in,” she explained. 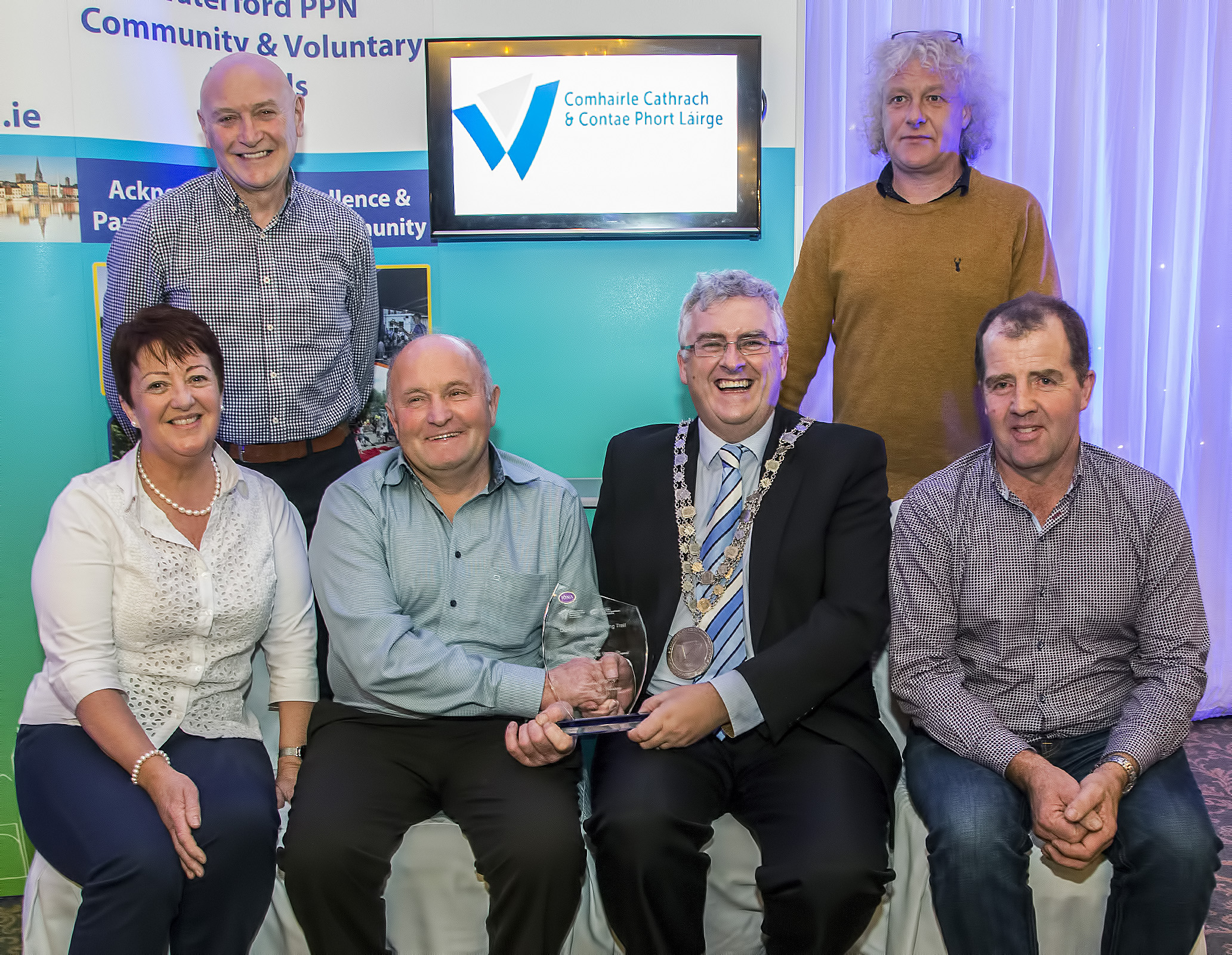 Since the award and the subsequent publicity which it generated, and thanks to recent promotion on RTÉ’s ‘Nationwide’, the route has attracted even more visitors.
“It’s great for us and great for the community,” says Mary, who says there is a positive knock-on effect for the village of Dunhill itself.
Community
Last year, Mary decided to open ‘The Happy Grind’ (barista coffee served from a vintage style horsebox) at the start of the Anne Valley route. Unsure of how her venture would be received, she took a leap into the unknown and opened from June through the summer until September from Thursdays to Sundays. Mary explained that business was slow at first but gradually got busier. “We were testing the waters last year and we were really happy with how things went,” she said.“This year, everyone keeps asking ‘are you coming back?’”For 2020, Mary plans to open at Easter and operate right through the summer until September.
She is keen to ensure ‘The Happy Grind’ remains “community based” and says its presence at the start of the Anne Valley Walk provides an opportunity for people to linger and socialise.
Mary also organised free yoga sessions on Sunday mornings last summer which helped create additional vibrancy in the area. She was particularly delighted to see a newly married couple taking their wedding photos on the walkway last summer. “My father would never have thought someone would be getting their wedding photos taken on the Anne Valley! It’s incredible what a community can achieve together.”
Pride
“What Mary has added with ‘The Happy Grind’ has been unbelievable,” adds Willie Moore. “The feedback has been brilliant.”For Willie, who is Chairman of the committee, there is a huge sense of pride at what has been achieved. The Anne Valley project started around 2011 and the support of local landowners has been crucial to its success.In total, six landowners were involved in Phase 1 and Willie admits that some may have initially been sceptical as to what was planned.“But when it got going, they saw what could be achieved,” he says.
Along with serving on the committee, Mary Finn is also one of the landowners associated with the walkway. Her land makes up the first section of the walkway which visitors pass through from the Dunhill side. 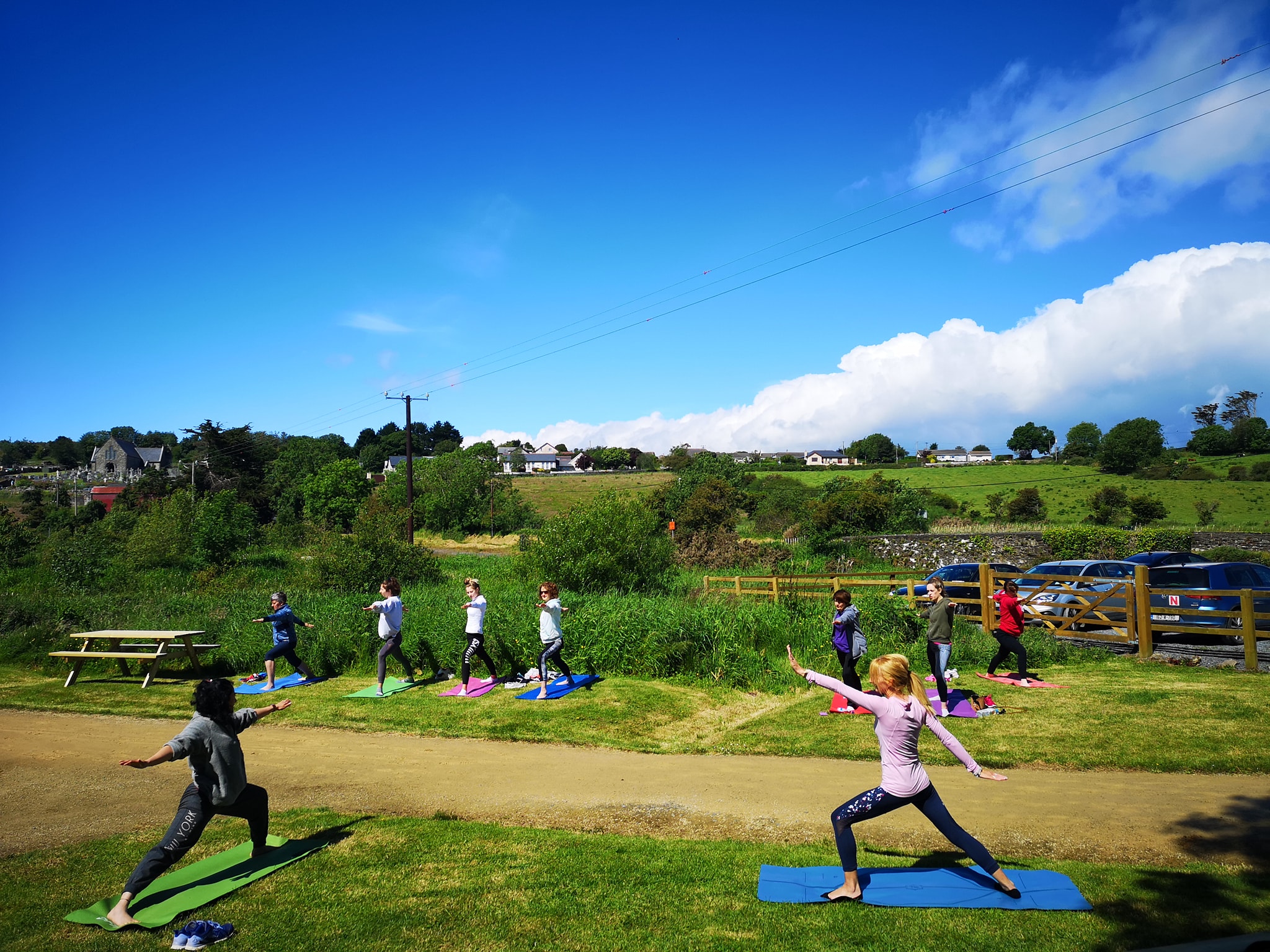 A yoga session on the Anne Valley Walk last summer.

“I never envisaged the success it would be. I walk it every day and I love it. I always meet someone, even on a miserable day,” said Mary. The project received funding from LEADER, but insurance proved to be a major issue. However, the National Trails Office were so impressed with what had been created at the Anne Valley that they came on board and took care of insurance.The Phase 1 route travels from Ballyphilip Bridge to Dunhill Castle and meanders alongside the Anne River through scenic landscape. Impressively, 14,000 visitors were recorded on the walkway over a three month period.
Heartened by the success of their initial phase, the committee embarked on Phase 2 which opened in December 2018.This section allows visitors to travel from Dunhill Castle to the Annestown.National Trails have continued their support and also covered insurance for the area around Dunhill Castle which is incorporated into the walk. Willie says agencies like LEADER, as well as Waterford City & County Council have also been very supportive of all their efforts. Recently, a 50-metre-long ditch was removed near the start of the route at Ballyphilip Bridge.
The committee are grateful to Mary Finn, as landowner, and those who carried out the work using expensive machinery at their own expense. They say the removal of the ditch makes a huge difference in terms of safety near the entrance as it removes a dangerous bend.
Popularity
With the addition of Phase 2, the amenity has become an even more attractive proposition for walking enthusiasts of all ages. Many visitors travel from Waterford City and Tramore to regularly use the route as do visitors from further afield. Large numbers of international visitors have also used the route. The committee have noted that some people find the nearby Waterford Greenway slightly intimidating due to the prevalence of speeding cyclists.
Cycling is allowed on the Anne Valley Walk for children aged up to 12, and many children could be seen testing out their new bicycles in the days after Christmas.
As the Anne Valley walk is so flat, it’s also very inclusive and accessible for all abilities. Members of the Irish Wheelchair Association regularly use the route. One of the only difficulties the committee members have faced is getting people to co-operate in relation to keeping dogs on leads. There are plenty of signs on display asking people to adhere to this rule – however this is not always respected. “People often asked why their dogs can’t go free but we have to be mindful that many people are afraid of dogs,” says Mary. She explained that it’s also important to protect the wildlife in the area but, like many such amenities throughout the country, it comes down to changing people’s mentality. The area is a haven for wildlife such as herons, kingfishers and otters and also possesses an abundance of flora and fauna.
Support
All of the committee members are regularly in touch with each other and hold meetings when required. While landowners are key to maintaining the walkway, members of the wider community are more than happy to help out also. “Lots of people say they wouldn’t like to be on the committee, but that they will help in whatever way they can,” explained Mary.
She praised the local community for the support which they give to any fundraising efforts which are organised.
Not content with sitting on their laurels, the committee aim to embark on Phase 3 of the Anne Valley Walk in the near future.This would stretch from the Ballyphilip Bridge to the townland of Glen and would go through another scenic area.With joined-up thinking, Willie believes the Anne Valley Walk could potentially link with the Waterford Greenway in the future.
For the moment, Willie says the committee members are keen to ensure that they represent Waterford with distinction in this year’s Pride of Place Awards and put their best foot forward.
Having achieved so much already, this enterprising and enthusiastic group are sure to enjoy success in whatever they decide to do.