The buzzards are after your cats and dogs! 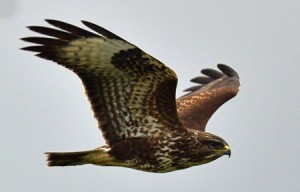 An Irish buzzard in flight.

A few years ago, on this page, I wrote about the steady spread of buzzards in a diagonal line across the country from Donegal to North Wexford where they were causing some problems.

Now I have learned that the birds of prey have moved south of that trajectory into Mid Tipperary where they have successfully turned their attentions to small dogs, cats and other lightweight animals.

Buzzards are birds of prey with powerful and strong claws and a wingspan of up to three feet. Some domestic pets in Tipp have survived attacks by the birds but they had to be treated and stitched up by veterinary surgeons.

Sheep farmers are concerned that the buzzards will play havoc with newly born lambs in the Spring and a number of calls have been made to have the protection orders on the birds lifted.

And late last week, I received reports that the birds have been sighted in woodlands around Portlaw as well as on the Tramore Road, just a short walk from the Kilbarry Nature Park. So keep an eye out, folks. The buzzards are buzzing!

Hillary: an inspiration for older women

As all the fuss and controversy over Donald Trump’s victory in the US Presidential Election continues, an English journalist has written a piece about Hillary Clinton’s positive example for older women that has been picked up around the world. 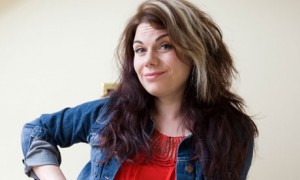 Columnist and 'bit of a hippy' Caitlin Moran.

Caitlin Moran is a broadcaster, author and prominent columnist with The Times of London. Her father is Irish and, according to herself, ‘a bit of a hippy’!

Caitlin wrote that the very act of Clinton running for President redefined thinking about the lives older women could live.

Instead of assuming that women should grow herbs or shrink from public view after their physically fertile years had passed, Hillary Clinton created the possibility of a woman leading the free world at age 67.

“In a stroke, this gives women a whole extra act in our lives. Another 30 years, minimum, in which we can continue to grow in power, wisdom, accomplishment, ambition and balls. The female narrative arc is reinvented like that – from slow decline to soaring upward thread.

“Clinton has made the sexual power of being a young woman – so often our gender’s greatest currency – look as nothing compared with what you can get in your seventh decade: the world.”

Last week, we reported on the launch of the ‘I Love To Laugh Out Loud’ book and CD by Tramore based writer, Sean O’Kelly.

Now, we can report on the fabulous prize Sean and his friend, Tramore accountant, Ward Walsh, won a few weeks ago. 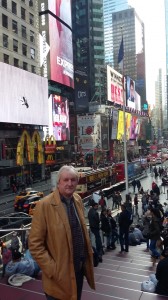 In a financial services online competition, organised by the ’24 Option’ company, the pair won first-class return flights to New York, stretch limo to their five-star hotel on the edge of Times Square and Premium Gold, second row tickets for the Conor McGregor title fight at Madison Square Garden.

In New York, tickets for the fight were more valuable than gold dust and the Waterford pair were offered $15,000 each for their tickets that had originally sold for $1,508 but they refused.

And, when they came out of the stadium after the fight, Sean and Ward were pestered by collectors who offered them $1,500 each for their ticket stubs! Again, they refused and kept their souvenirs of a once in a lifetime trip.

So what did Sean and Ward do to win such a prize? Firstly, they predicted that Donald Trump would win the US Presidential Election (Paddy Power had already paid out on Hillary Clinton). They also correctly predicted that shares would fall and gold would rise and from the small number of correct entries, their names were pulled from the hat.

Mixed signals at the ambush

Harry the Hyena had a big crush on Gertrude the Giraffe and with the help of his pal, Mossie the Monkey, he finally got a date with Gertrude and everything went swimmingly.

Even though their respective pack and herd didn’t approve of the match, Harry and Gertrude were very happy until Larry the Lion stuck his nose in.

Larry considered himself the King of the Jungle and expected Harry to make way for him with Gertrude. However, Harry was made of stern stuff and, knowing that Larry would demolish him in a one-to-one battle, decided to use guerilla tactics against his rival.

So, Harry and Mossie devised a plan that would see Harry ambush Larry under a tree and then Mossie would jump out of the branches and attack Larry from on high.

Everything went to plan and Larry walked into the ambush. Harry, teeth and claws bared, launched into the lion but there was no sign of Mossie and, within minutes, Larry had won the battle.

“You fecking eejit, why didn’t you join in as planned,” asked a bruised and battered Harry some hours later.
“I’m really sorry pal, but you were laughing so much I thought you were winning and didn’t need me,” answered Mossie apologetically.