A horrible consequence to a terrible atrocity

Regular readers will know from my columns down the years that, as well as having ink in my veins, I am also a musician and a former showband member.
For many like me, the Miami Showband Massacre in the summer of 1975 (in the same week that Tom Dunphy died in a road accident) was a dreadful watershed.
The atrocity marked the end of the showband era and it did so with such mind numbing violence that, even now, I shudder when I think of those awful murders.
Bassist Stephen Travers from Carrick-on-Suir was a member of The Miami and, though badly injured, he survived the massacre.
Then 24 years of age, his life hung on a thread but he pulled through thanks to the valiant efforts of the surgeons and staff at Daisy Hill Hospital and his own indomitable will to live. It took over 30 years before Stephen felt able to write his story in a 2007 book entitled ‘The Miami Showband Massacre – a survivor’s search for the truth’. 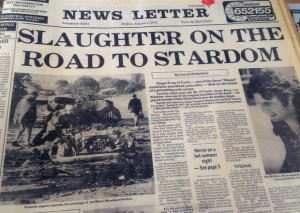 The front page of the Belfast Newsletter, in the wake of the Miami Showband Massacre.

The three musicians who died in a hail of bullets were Fran O’Toole, Brian McCoy and Tony Geraghty and the reason I am writing this piece is that very few people outside of the O’Toole family circle knew what became of Fran’s widow, Valerie, and their two daughters, Rachel (4) and Kelly (3).
That all changed over the Christmas period when RTE Radio 1 broadcast a documentary, ‘After the Music: The Daughters’ Story’, and a full-page report appeared in The Irish Times by Susan McKay.
The story of what happened to Valerie, Rachel and Kelly is one of the saddest one can imagine, a tragedy on top of a tragedy.
Those interested can find the documentary in the RTE archive and Susan McKay’s article is also available from The Irish Times.
One needs to read and listen to the originals to appreciate what happened but, in a nutshell, Valerie was devastated. She said recently she had “fallen to bits and was never put back together again”.
On a respite holiday to Spain a couple of months after her husband’s death she met a Canadian man and they married within a short period of time.
She then took the two children and emigrated to Canada. There were few if any goodbyes leaving their loved ones in Ireland dreadfully upset and bereft.
According to the girls, life in Canada was very hard as they moved from one small outback town to another. Things were bad. Valerie could barely function herself and the two children had to more or less fend for themselves.
Eventually, they all drifted apart and it was to be quite a few years before the two sisters found each other again.
Today, the girls are fulfilled, reunited with each other and happy living in Canada. Rachel is married and works as a very successful television production designer while Kelly, married with two sons, is also artistic and successful.
However, both admit to being scarred by the events of their unhappy childhood. According to the Times article, the girls “do not see their mother” although Rachel talks to her on the telephone sometimes.
How sad it all is, especially when one considers how the future might have been for that once happy little family until all their lives were shattered forever by a terrorist atrocity. God love them.