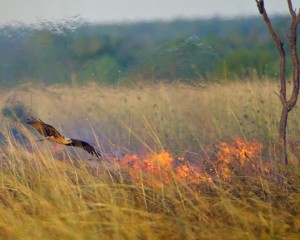 A bird of prey swoops low over a scrub fire in search of a meal.

Well, well, well. You can’t beat nature and all that jazz! You know those forest and bush fires that rage out of control in countries all over the world and even in Ireland to a lesser extent?
Up to know the authorities have blamed careless people who light fires where they shouldn’t or those who don’t properly put out camp-fires before they move on.
Some devastating fires have also been attributed to farmers clearing scrub or even pyromaniacs who just love to see those flames leaping high into the sky.
However, it seems the authorities have even more to be worried about since evidence emerged that more than a few serious fires have actually been started by clever birds of prey such as Falcons and Kites.
Even though old country people have long known about it, for the first time ever birds have actually been seen by park rangers picking up burning sticks from camp fires and then dropping them onto fresh grounds to force small animals into the open.
Patiently, they wait for the animals to emerge from the burning undergrowth. The birds then swoop down to catch their meal.
The accounts suggest that the birds of prey can carry sticks for up to 500 metres and they do this without the fire dying or singeing their own feathers. You could never be up to them!