Home » Opinion » Tales of the Tellurians » Brooklyn on the Slaney!

Brooklyn on the Slaney!

There was a great buzz around Waterford in the early 1970s when Ryan O’Neill, Marisa Berenson and Stanley Kubrick arrived into town to make the film, ‘Barry Lyndon’.
While hailed as an artistic and technical success, the movie wasn’t a box office smash and there were few if any film-buff visitors to Waterford seeking out locations.
However, our friends down the road in Enniscorthy are having a field day following the success of the Oscar nominated film, ‘Brooklyn’.
Because of Colm Toibin’s novel there had already been quite a few visitors to the town mostly from Britain.
However, such is the influx these days that Cathy Keane of Heritage Tours Wexford has commenced a dedicated Brooklyn Bus Tour.
People are coming in their droves and, as well as visiting all the Enniscorthy places of interest, Cathy drives them out to Curracloe Strand where they queue up to be photographed in exactly the same spot in the sand-dunes where Saoirse Ronan and Domhnall Gleeson were filmed.
If it goes well at the Oscars and the summer is good, Cathy might have to put a second bus on the tour! 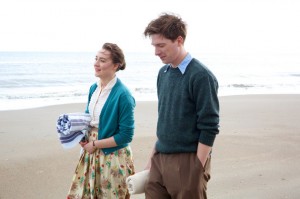