One of the most respected Waterford traditional and contemporary folk musicians, Gerry Madden, has just released a solo CD containing 13 beautiful tracks featuring the mandolin as lead instrument.
It is rare to hear a ‘mandolin’ album these days but this CD with its mixture of haunting traditional airs, country classics and original material is a joy to listen to. 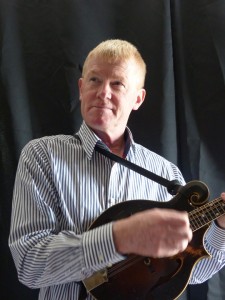 Gerry Madden: a master of the mandolin.

Gerry is a current member of the highly regarded ‘Strange Fruit’ and for many years played with such groups as The Lonesome Hobos, The Flint Hill Boys and the much lamented ‘Davitt’s Revised’.
While Gerry is a multi instrumentalist he enjoys a national reputation as a mandolin player and over the years he has guested on the albums of some of the country’s most respected players.
On this recording, entitled ‘Baker’s Dozen’, many of them have returned the compliment and featured are co-producer Moyra Fraser (keyboards and accordion), Charlie Atkins (fiddle), Johnny Gleeson (Dobro) and Ger McGrath (clawhammer banjo). The guitarist and co-producer was the legendary Vinnie Baker who died before the project was completed. Recorded at VeeBee Studios, Mullingar, post editing was carried out at Paul Grant’s Camnoc Studios in Slieverue.
Gerry has dedicated the album to his wife, Liz, and children, Ciaran, Sinead and Aoife. On the CD’s last track, ‘Danny Boy’, Gerry pays tribute to his late parents, Bridie and Jimmy Madden, formerly of Rockenham, Ferrybank.
Copies of the CD and further information is available at maddengerry@yahoo.ie