Of late, I have done a lot of lengthy queuing at airports and there is no doubt in my mind that some of the chancers and divas that do their best to avoid those queues should qualify for an Academy Award. Some of them should also qualify for a number of other things as well but that would be against the law.
There are annoying people in the queues as well. Top of my hate list are the ones directly behind you that insist on putting their luggage on top of your heels.
The people in front of you often take a step backwards and you have nowhere to go. Then there are the mutterers that everybody can just about hear giving out non-stop about everything that nobody can do anything about. 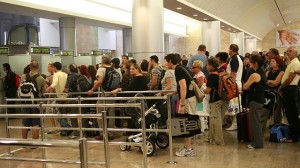 Of course, every queue has people who, having stood waiting for half and hour or more, cannot find their documentation when they approach the check-in/baggage-drop desk.Finally, and I have sympathy here having been that soldier, there are the families that, just as they approach the desk, one of their little darlings takes off like a bat out of hell and it takes ages to finally grab him/her and return the fugitive kicking and screaming to the desk.
By the way, the mutterers love this and you can hear their displeasure rippling through the queue.

And so we come to the queue dodgers. Firstly, there are the non-believers, usually an elderly couple, that arrive in all confused. They look at the start of the queue and then look at the end of the queue. They can’t believe it is so long so they just stand there out in the open looking as if they might cry.
Eventually one of them goes up to the desk to enquire could this really be the queue for their flight? He/she returns to the partner and they continue to stand there looking bewildered until some kind soul near the top of the queue says: “Wisha, you’re all right. Don’t get upset. Stand in here in front of us.”
The mutterers start muttering and more than a few others have steam coming out of their ears, especially when everybody knows that the same old pair are two scallywags who could buy and sell you while living in your ear.

The real smart operators are usually well-dressed couples that march past the long queue with their noses in the air and stand next to the first people at the desk without giving anybody a second chance. They fall into two categories. There is the couple that when called out by the crowd will suddenly giggle and say: “Oh Golly, really, we just didn’t notice the queue and smiling and rolling their eyes at their silly mistake they sheepishly trudge to the back of the queue.
But then there is the hardcore couple that also walks past the queue and straight up to the desk.
Usually, but not always, the woman is the main culprit. Looking like a real tough-nut, she makes no attempt to avoid noticing the queue and occasionally looks down her nose at the plebs that, unfortunately, will be on the same flight as them.

Sometimes, somebody will call out to them and tell them to get to the back of the queue but she/he just ignores the comments and stares back defiantly.
The sad thing is, they usually get away with their selfish and conceited bravado. It actually doesn’t bother me because if they act like that at an airport they probably do the same in most other aspects of their lives. Sooner or later they’ll get their comeuppance!