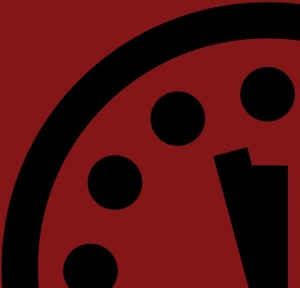 Ever since the end of World War II, a group of distinguished scientists regularly discusses how close the world is to catastrophe, mainly through nuclear war.
The method they devised was the Doomsday Clock and, when they began in 1947, they set the clock at seven minutes to midnight to symbolise our proximity to an apocalypse.
Over the years, reflecting the state of the world, the clock has moved closer or further away from midnight.
The doomsday clock was turned back to the furthest point ever in 1991 when it was set at 11:43 after the USA and the Soviet Union signed the first Strategic Arms Reduction Treaty.
The closest the Doomsday clock came to midnight was in 1984 because of stalled communication between the US and the Soviet Union. Worried scientist declared the world was a mere 180 seconds away from the proverbial end of days.
However, the signing of the Intermediate-Range Nuclear Forces Treaty relaxed tensions in 1988 and the minute hand was rolled back once again.
Last year, because of unchecked climate change and a growing nuclear arms race, the clock was set at 3 minutes to midnight.
Last week, the Bulletin of Atomic Scientists announced that there had been no discernable change during the 12 months and the world’s Doomsday Clock would remain at three minutes to midnight. Scary stuff, folks.