Leave the judges and their poor boxes alone

The matter of District Court judges using the ‘poor box’ as a means of defendants avoiding a conviction is once again back in the news. Under scrutiny is the very idea of a ‘poor box’ and also the charities that benefit.
Personally, I firmly believe in the notion of the poor box and in judges having discretion in sentencing and I think people, however well meaning, should leave well enough alone.
The practice of having a poor box dates back to before the State was founded and many would agree that it has served the State and many of our citizens well.

As somebody who spent many years covering literally thousands of cases in the District Court, could I just clear the air about certain issues that, in my opinion, have become muddled in the public view.
First of all, people who commit serious crimes are not offered a chance to pay into the poor box instead of a conviction. Neither is it the case that people with money can buy their way out of a conviction. If a judge in his/her wisdom decides to give a person a chance, the nature of the offence and the financial means of the defendant are taken into account. For instance, for a similar offence, a person in a permanent, well-paid job is likely to be asked to contribute more than an unemployed defendant with a family to support.
There are different nuances involved with every case. The offences might sound the same but, just as people are different, so are the circumstances. 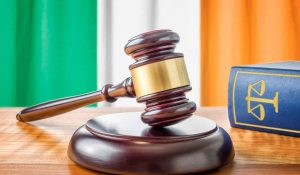 Here’s an example of a situation where I have witnessed the poor box being utilised, correctly and mercifully in my opinion.
Take a group of young lads out on the town celebrating their Leaving Certs. Not used to drinking they have a pint too many and, when approached, foolishly accept a cannabis reefer when it is offered to them.
They meet the Gardaí, one things leads to another and, suddenly, they are before the court charged with possession of the drug.
Now here’s the situation. These youngsters have no previous convictions. They are just starting out in life, they are not regular drug users and, more than likely, would probably never touch cannabis again even if they hadn’t been apprehended by the Gardaí.

A conviction for possession of cannabis could be disastrous for future employment and their careers in general. It might also prohibit them from acquiring a visa to the USA, Canada and Australia if they ever sought one.
So, the judge sometimes takes a calculated risk that the fright of being in court is enough and permits them to avoid a conviction by paying a sum of money into the poor box. Sensible and wise? I think so.
The same applies to a wide range of so-called minor offences involving first time offenders. Incidentally, very often it is a defence solicitor that pleads with the judge to use his/her discretion and offer the poor box route.
Usually, towards the end of the year, money from the poor box is distributed to charities such as the Saint Vincent de Paul, the Simon Community, homeless shelters, etc. Most judges will issue a list of charities that benefitted if asked and, sometimes, people complain that the recipients of some donations are blacked out. The reason is that some charity cases, for the recipients’ privacy, are too sensitive to publicise.

In Kerry, just before Christmas, the County Council wrote to the local District Judge pointing out that they considered too much of the poor box money was going to overseas causes run by Irish charities and suggested more should be kept at home. As far as I know, the Judge still kept his own counsel.