Many readers will remember the exciting days of pirate radio in this country when stations like the original WLRfm burst onto our airwaves with non-stop music and local talk.
It was difficult enough to transmit back then as relatively large equipment and high terrain aerials were required. 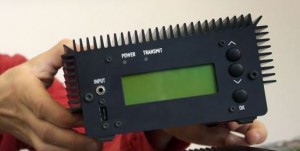 One of the new digital ‘shoebox size’ radio transmitters.

Now, technology has galloped forward and anybody with a computer and broadband can listen to all the Irish stations and any station in the world that they fancy.
It works the other way as well and thousands of Irish people all over the world listen to their home stations on the internet every day, something that would have been unthinkable not too long ago.
However, it is now also possible to transmit on FM radio using new ‘pocket transmitters’ that are about the size of a shoebox!
The little modular transmitters were specially designed to give an independent voice and counteract official radio in war-torn countries.
The transmitters can be hidden in abandoned buildings, apartments and even wedged into trees and broadcast over an area of about five miles. People might not have computers or broadband but they have transistor radios and can pick up news that they wouldn’t hear on ‘official’ radio.
Something tells me that, even though it would be illegal, some enterprising young sparks might be tempted to use this new technology to start a new wave of pirate radio.