Home » Opinion » Tales of the Tellurians » Take a Walk, Have a Drink and Shout at the TV!

Take a Walk, Have a Drink and Shout at the TV!

A recent scientific investigation into ageing came up with some interesting findings.
Globally, the average life span is 72 years and, for a few lucky people, it may exceed 100 years. In the early 1900s, it was in the region of 50 years. Today’s extra decades come courtesy of vaccines, antibiotics, sanitation and improved detection and treatment of a range of diseases.
According to the World Health Organisation, quoted in a Time magazine special on ageing, an estimated 60% of all people will live in cities by 2030, many of them aged over 60. Cities increasingly rank high on both doctors’ and seniors’ lists of the best places to age gracefully.
A 2017 study in the journal ‘Personal Relationships’ found that it could be friends, not family, that matter most. The study looked at 270,000 people in nearly 100 countries and found that while both family and friends were associated with happiness and better health, as people aged, the health link remained only for people with strong friendships.

William Chopik, Assistant Professor of Psychology at Michigan State University says the importance of avoiding conflict or emotional upset has been oversold as a key to long life. Shouting back at the television might help as passion may be more life-sustaining than apathy, engagement more than indifference.
Incidentally, Exactly how much, or how little, exercise it takes to begin paying dividends has been one of the happy surprises of longevity research. A 2016 study found that elderly people who exercised for just 15 minutes a day at an intensity level of a brisk walk had a 22% lower risk of early death compared to people who did no exercise. A 2017 study found that exercising even just two days a week can lower risk for premature death. 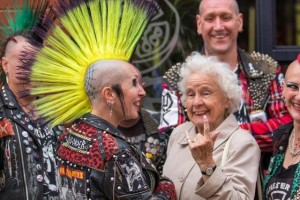 Be positive: it’s never too late to embrace new things.

And then there’s the drink! The Time special investigation quotes an August 2017 study published in the Journal of the American College of Cardiology that found light to moderate alcohol use (14 or fewer units per week for men and seven or fewer for women) is associated with a lower risk of death compared to people who don’t drink at all. Of course, if you’re a nondrinker that’s no reason to start. However, among the more than 333,000 people in the study, light and moderate drinkers were 20% less likely to die from any cause during the study period compared with their completely abstemious peers. Cheers!