The Beast of Listrolin’s Cousin

Two years ago, I closed the file on the mysterious Beast of Listrolin, a black panther-like animal that was first seen in Listrolin in South Kilkenny.
Following numerous sightings over a number of years in South Kilkenny and just over the river in parts of Kilmeaden, Mount Congreve and Bilberry, the mysterious black cat simply disappeared.
Having spoken to many of the people who encountered the big cat I was in no doubt that it existed. It was probably an exotic pet illegally imported that escaped and was either recaptured by its owner or died in the wild. 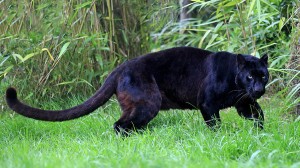 A panther-like creature has been sighted in the Crosshaven area in Lower Cork Harbour.

The reason I bring this up is that the Beast’s ‘cousin’ appears to have surfaced in the Crosshaven area of Cork. A black, panther-like animal has been sighted six times in nine days.
The authorities believe the sightings to be ‘credible’ and local people have taken the situation very seriously. A hunt is underway but will it reveal anything? I’ll let you know although if such an animal is captured in the wild the world’s press will be on the scene pretty quick.