It’s time Irish football stopped living in the past 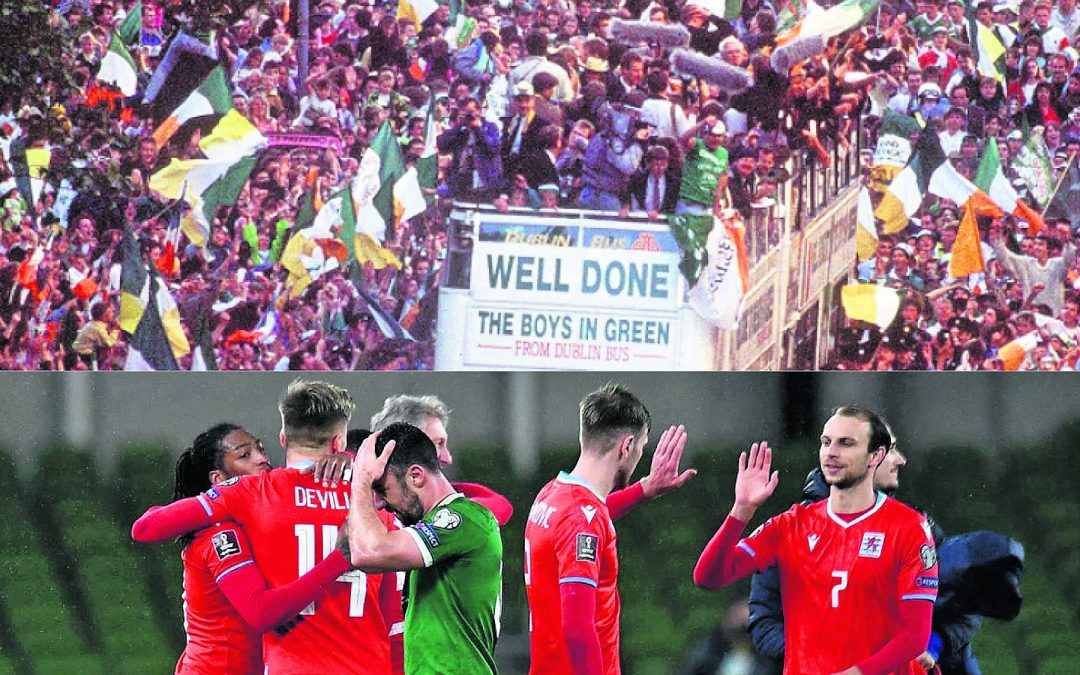 There’s been some bad nights following Irish football down the decades, but Saturday night’s defeat at home to Luxembourg was undoubtedly the worst of the entire lot.

It doesn’t matter who the manager is, what players were available or unavailable, what tactics or formation were adopted – losing at home to Luxembourg in a World Cup Qualifier is inexcusable.

Narratives in the media centre upon ‘World Cup dreams up in smoke’, but the reality is that the minute Ireland were drawn in a group with Portugal & Serbia, our World Cup dreams were already dead and buried before things had even begun.

On Tuesday night in Belgrade after defeat to Serbia, the famous George Hamilton line – ‘a brave Irish performance falls just short’ was uttered once again. If I had €10 for every time I’ve heard that, I wouldn’t need to work. On Tuesday, there was some semblance of hope that Ireland could be turning a new leaf, only for the players to go out and shoot themselves in the foot with a horror show against the mighty Luxembourg at the Aviva that was indicative of where Irish football is really at.

How terrible must things be that a defeat littered with mistakes in Belgrade could be considered so promising? Yet of course, it was another false dawn, something that we’ve become rather accustomed to as Irish supporters. 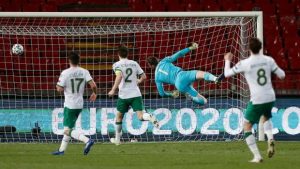 RTÉ’s coverage of the game was almost laughable to an extent, as is their coverage of Irish football in general in truth. Our national broadcaster is far more concerned with the fortunes of Manchester United and Liverpool than anything on our own island.  On Friday, it was only the umpteen times that they referred to Waterford as ‘Waterford United’ and their undoubted lack of knowledge of the two sides on show. Saturday night’s defeat to Luxembourg saw them trying to find some scrapes of positivity amid the misery, like how young Gavin Bazunu in goal was ‘very vocal’ and ‘organised his defence well’, and Seamus Coleman put in a ‘captain’s performance’.

If that’s what we’re clutching to now, then someone needs to say a prayer for us.

Maybe it would be better to focus upon the fact that Ireland have changed to five at the back for two games that have yielded zero points, the country is on a run of 11 games without a victory (if they win against Qatar, does that even count?) and with five at the back, the Boys in Green couldn’t even stop Luxembourg from scoring.

There’s no doubt that the Stephen Kenny era has been a calamity from start to present but what even is the alternative? Who else can come in and steady the ship? Give Sir Alex Ferguson in his pomp this crop of footballers and the end result would likely remain the same.

Still, seeing Ireland trying to enact the high pressing suffocating possession-based football of Guardiola and Klopp-esque sides is almost cringeworthy. ‘Hoofball’ isn’t pretty, but shouldn’t teams play to their strengths? It seems to be all that Ireland has ever been good at. There’s this strange perception out there that the great Irish sides of yesteryear played some beautiful football. They didn’t. At times, it was horrible to watch. Football is a results business, and wins are far more important than how they are achieved.

For how long now have Irish fans been crying out for a manager to come in and get the team playing the ball along the ground and some tiki-taka style football? I can remember it as far back as when Steve Staunton held the reins, and it’s likely going on far longer. Now they’ve got a coach that’s trying to achieve that, and 99.9% of the country is calling for his head. Be careful what you wish for springs to mind.

Trying to get Ireland to play attractive football is like trying to free the cargo ship from the Suez Canal with a pair of nail clippers and a can of WD40. It doesn’t matter what your goal is, if you don’t have the tools to begin with.

Irish football is clinging to the past. It was said to me after the game on Saturday night that at least we have the Jack Charlton documentary (which I must add was truly fantastic despite our current woes) to look forward to on Sunday. Still, if a documentary is what we’re looking forward to from a football perspective in the middle of a World Cup qualifying campaign, that tells you all you need to know.

It happened 31 years ago, yet when you mention Irish football to someone all you ever get thrown at you is Italia ‘90, the Olé Olé brigade and Jack’s Army. It’s time Irish football stopped clinging on to the successes of the past and actually invested in the future.

The Jack Charlton days were great, so were the times when we had players like Robbie Keane, Roy Keane, John O’Shea, Shay Given and Damien Duff.

We don’t have those players anymore. Our national football association has been shrouded in controversy year after year. Our national league remains one the most underfunded and barren in Europe. What’s there to be actually positive about when it comes to Irish football? We played well at three tournaments in the late ‘80s and early ‘90s and that seems to be good enough for some people thirty years on.

The saddest thing about losing to Luxembourg was that it wasn’t even that much of a surprise. As the game grew, there was almost an inevitability to its eventuality.

It was a horrendous performance and a horrendous result. We can’t just get manager after manager, and worm our way to the odd win here and there while our fans watch through their fingers. Maybe we should actually provide proper resources and overhaul the entire FAI system, establish a better development pool of players and improve the standard of the league in this country.

Irish football has been allowed to drift by too many ‘decision makers’, people who are very important in their own minds. For all the misery that surrounds Irish football, fair play to Luxembourg – they did to Ireland what Ireland used to do to others, play with an actual bit of heart. 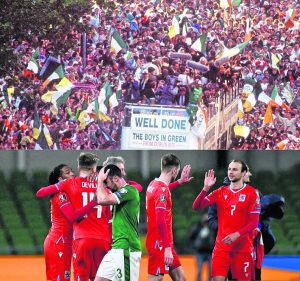 Once the masterminds of the giant killing, the current fortunes of the Irish national team are grave in contrast to those of yesteryear.

Sack or back Stephen Kenny, it doesn’t matter. Irish football was allowed to wilt and instead of being watered, the money was spent on champagne and caviar functions and now there’s a far-too-late attempt to close the gates long after the horse has bolted. Saturday night was the reaping of what had been so pitifully previously sewn.

It takes rough experiences and the darkest of nights to learn and to grow. Fans will rightly demand better, but what should be demanded is a future, not a temporary fix.

Until then, we can bask in yesteryear and pretend that what’s going on around us isn’t happening, because that’s what most people seem to be doing, even those at the very heart of the issues. Alexa, play ‘You’ll Never Beat The Irish’ by the Dubliners – it’ll be grand and all that..