The Pope Should Buy a Television 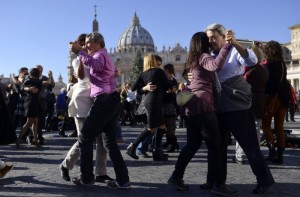 Tango dancers from all over the world came and danced in St Peter’s Square in Rome as a gesture to dance fan Pope Francis on the occasion of his 78th birthday.

As well as obviously being a genuinely humble and holy man, Pope Francis is turning out to be a bit of a character to boot.
Apparently, as a gesture of personal self denial, he decided to give up watching television about 15 years ago and he has maintained that ever since.
However, as an enthusiastic supporter of his home-town South American soccer team, Argentina’s San Lorenzo, he is very interested in their progress.
He doesn’t watch television but, being a resourceful person, he has assigned one of his Swiss Guards to view the game on his behalf and tell him all about it!
Really, it’s a pity he doesn’t watch the goggle box because, as a young man, he enjoyed dancing, especially the Tango, and he would love ‘Strictly Come Dancing’.
Respectfully, Your Holiness, you’ve got the weight of the world on your shoulders most of the time so, please, give yourself a break and enjoy the odd hour of television.